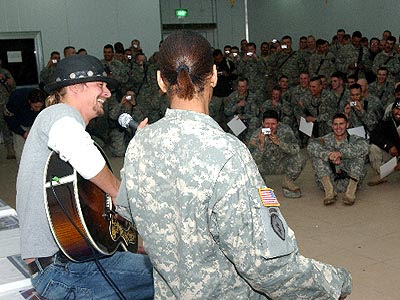 CAMP RAMADI — The United Service Organization brought its Holiday Troop Visit Tour to the service members and civilians here with a special show at the Morale Welfare and Recreation (MWR) center, Dec. 19.

Williams entertained the crowd with more standup before Kid Rock came and stole the show with each song he performed.

“I was going to come here and play a couple of Christmas songs,” he said. “I think I’ll start with the songs I grew up with instead.” Kid Rock played “Sweet Home Alabama” as the crowd sang and clapped along. After a few more classic rock and roll tunes, he played some new songs he wrote this year and sent the crowd in an uproar with applause and
cheers.