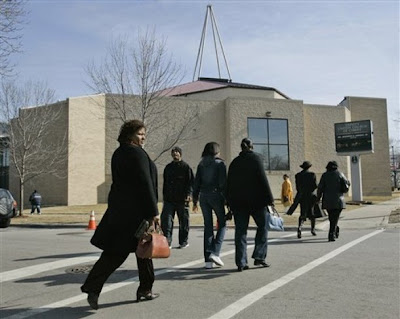 What led Barack Obama to choose Jeremiah Wright's church twenty years ago? A Chicago Tribune investigation shows Obama didn't choose the church out of a desire to follow Christ or grow in the Christian faith. Rather, Obama calculated Trinity would be the most strategic place for him to launch a political career. Chicago Tribune:

The day Barack Obama first showed up in the office of Rev. Jeremiah Wright Jr., more than 20 years ago, the pastor warned him that getting involved with Trinity United Church of Christ might not be "a feather in your cap."

Obama was a community organizer trying to build support for his group on the South Side of Chicago, and a friendly minister at another church had suggested he'd have more luck with black clergy if he joined a congregation himself.

"Some of my fellow clergy don't appreciate what we're about," Wright told him that day, as Obama would later recount it. "They feel like we're too radical. Others, we ain't radical enough."

Obama ended up joining, a story he tells in his memoirs, and later was influenced enough by Wright to derive the title of a subsequent book, "The Audacity of Hope," from one of the pastor's sermons.

But despite the warning, the association did not seem to be a terribly risky one for Obama, given the arc of the career he was beginning to craft even then.

He was building his résumé as a street-savvy community organizer while also applying for admission to law school. Within the walls of Trinity he found a connection to the African-American community he'd lacked as a child raised by his white mother and grandparents, an important cultural marker for a biracial candidate who later would try to appeal to black and white voters alike.

He'd share church membership with some of Chicago's influential thinkers and leaders, among them lawmakers, judges and Oprah Winfrey. And in Wright he would find an inspirational messenger—not to mention one of Chicago's most prominent black ministers—in a setting where church affiliation can form part of a person's political pedigree.

For someone thinking of running for mayor, governor, senator or any statewide office, being part of Trinity would likely be an asset.

On the national stage, that asset has become a liability. Obama's association with Wright has sent his once-soaring presidential campaign into a strategic tailspin, thanks to controversial statements from old sermons the minister publicly repeated at high volume last week.


The above photo (AP: Brian Kersey) is a file photo showing worshippers arriving at Trinity United Church of Christ in Chicago, Sunday, March 11, 2007.