Let's look at the paragraphs in question. First, here is a paragraph from a McClatchy article by William Douglas and Margaret Talev:

"Obama was a child when Ayers was engaged in violent anti-Vietnam War protests, had no connection to them, and denounces them. Ayers is now an education professor in Chicago. Obama once served with Ayers on a community education board funded by Republican donors. He says Ayers has no connection to his campaign."

Now, look at this paragraph from an Obama radio ad released this week.

"Bill Ayers is a professor of education who once worked with Obama on a school reform board, a board funded by conservative Republicans tied to McCain. When Ayers committed crimes in the sixties, Obama was eight years old. Obama condemned those despicable acts."

Let's break down the key phrases, side by side:

McClatchy: "Ayers is now an education professor..." Obama ad: "Bill Ayers is a professor of education..."

McClatchy: "... once served with Ayers on a community education board..." Obama ad: "worked... on a school reform board..."

The phrasing is almost identical -- even the cadence is similar. Did the McClatchy reporters lift phrases from Obama campaign ad and make little modifications to use in their news story on Bill Ayers? I don't know, of course. It's probably unlikely they lifted the transcript from the ad, but it's hard to believe the similarities are a coincidence. I think the most likely scenario is McClatchy's views of the election are identical to the positions of the Obama campaign.

How pathetic for McClatchy, that their reporting is hard to distinguish from Obama campaign commercials.

Just for fun, I'm including the photo below, which shows McClatchy reporter Margaret Talev and Barack Obama looking at key chains in August, 2008. 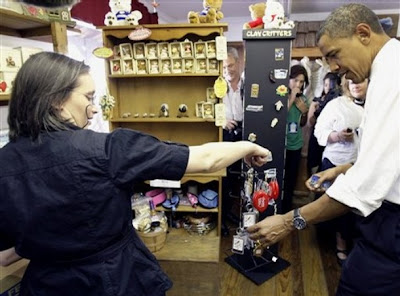 Oh my gosh! The SMOKING GUN!

Perhaps they sound alike because they are the uncontradicted facts.

i'm sorry, but this is lame. there's nothing factually wrong with the statements and trying to say a phrase like "obama was 8 years old" is the same as "obama was a child" just points out the obvious: the statement is true, so regardless of how the newspaper framed it, it was going to mirror the factual statement. i come to this site just to see if there are opinions out there that i, as a political liberal and member of the media, am blind to or overlooking. stretching stuff like this doesn't help that case.

To the 2 anonymous quotes above --

When McClatchy's published reports are indistinguishable from Obama campaign commercials, McClatchy has a problem.

You might not notice the problem, but polls show a majority of Americans do.

From Pajamas Media, Obama Supporter Assaults Female McCain Volunteer in New York. An arrest was made. They have a scan of the paperwork.

This happened a month ago. Physical assault that tells you where the real hate is in this campaign.

Who does McClatchy attack? A plumber chosen by the One to ask a question.

If you wonder why no one cares that your newspaper is failing, this is why.

McClatchy Watch? Don't 'ya just LOVE your fair weather friends here? Those who come for the dirt on the company, then feel compelled to contradict your political views?

Paraphrasing Don Feder:
"Liberals will defend to the death your right to agree with them."

I sure do hate me some liberals!

Anon5:38 here.
I've judged that the last poster to be an idiot. Just for the record.

i'm the second anonymous poster guy that mcclatchy watch responded too. my point is that ripping the media for being factually accurate is silly. while you rail against the similarities of the story and obama's campaign, you don't mention that the story spells out exactly mccain's robo-call message connecting obama and ayers. why is printing something that is similar to a candidate's response so horrible yet printing verbatim the other candidate's accusation fine?

Journalists are supposed to hate reporting by stenography. That's their biggest claim to relevance. Otherwise why not just hire a secretary to rewrite press releases?

So why are they abandoning their role as Journalists to repeat Obama's campaign press releases almost verbatim?

By their own standards they're stomping on their own professionalism.

In your dreams. Obama will be the next President. 15 days and counting!!!!!!!!!!!!! Then you can spend the next 4 years ,,,,hoping, wishing and lose again. The country is tired of the hate message that seems to be the only platform you Bushees seem to have.