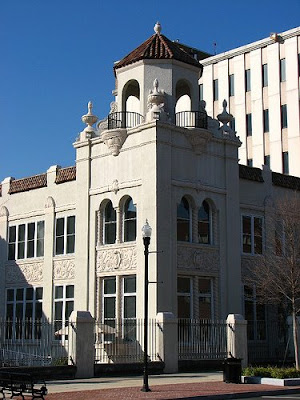 The Columbus Ledger-Enquirer announced it is eliminating 20 positions and cutting wages. From the paper's web site:

The Ledger-Enquirer said Tuesday it is cutting its work force for the third time in less than a year as part of a restructuring by its parent firm, The McClatchy Co.

The newspaper will eliminate 20 positions, said Ledger-Enquirer Publisher Valerie Canepa. Thirteen of those positions are open and not being filled. There will be seven layoffs spread across the company, she said.

“These are painful cuts, and we do not like to make them,” Canepa said in a statement. “But advertising revenue continues to decline in a weak economy and we must adjust our operating costs. We reviewed our budget line by line to capture savings in a number of areas. But, unfortunately, it was not enough to avoid further downsizing.”

The Ledger-Enquirer cut 10 positions last June through voluntary buyouts. That included five newsroom employees. In September, it eliminated nine more positions, four of them through buyouts. The rest were open jobs.

The current round of employee cuts will reduce the work force from 179 to 159, or 11 percent, Canepa said. The displaced staffers come from the newsroom, finance, advertising and advertising production departments. No reporters, photographers or outside sales people are being laid off, she said. The layoffs will take place this month and in April.

Some finance and accounting tasks will be moved to the Macon Telegraph newspaper to create a regional finance center, the publisher said, while most advertising production work will be handled in Macon.

This info came to me a week ago by email... odd that the formal announcement was delayed until today. (Photo credit: WestC07 at Flickr)
.
.
.
on Wednesday, March 18, 2009

"Advertising revenue continues to decline..." and yet no sales reps made the chopping block. Interesting....

they never will! they are the revenue side. the newsroom is the overhead side.

Quit blaming the economy. Maybe it's time you got some Sales Reps that actually want to work and aren't just here for the insurance.

Most sales reps are 100% commission so if they don't sell ads, they don't get paid.

Well ours get a nice chuck of change as a base pay.

I need to see Columbus newsroom merge with the Macon newsroom. No need to have to newsrooms when you can combine both. Here's my proposal: One Executive Editor for both sites, Universal Copy Desk, 2-3 feature reporters for each site, one online department for both sites, and the rest need to trim down more. I see more AP news in the paper.

Ledger-Enquirer's sales team is one of the best within the McClatchy. They bring in decent numbers given the bad economy. They rank between 1st & 3rd place. -- Have you ever noticed that there are more AP stories in the paper?

The idea of merging newsrooms that are roughly 80 miles per way means neither newspaper will effectively serve their immediate marketplaces. Granted, the layoffs, buyouts and diminishing space make it nearly impossible to serve that mission now.

Merging both newsrooms will be effective as long as there's a strong leadership from the top. To save more money, redundant positions need to be eliminated. Have one person do two jobs. It's not mean. It's a wise business decision.

Wow! That's mean. When you said, "Maybe it's time you got some Sales Reps that actually want to work and aren't just here for the insurance" --- That's true and false. You're pointing fingers to one or two. Focus on the majority. Our sales team is an excellent group of talented individuals. Go Team!!!

You said "Advertising revenue continues to decline..." and yet no sales reps made the chopping block. Interesting...." --- Why? Because they work hard to pay for your salary in the newsroom.

To save McClatchy more dollars, merge daily newspapers that are within 80 miles. Start from the Carolinas, Georgia, and Florida. Reduce the non performing big papers to "Online" only. No need to bleed more. If they can't go online, then shut the doors. All merged newspapers need only one top head in each department. That will save more money for McClatchy.

Who likes this plan?

I have an idea. Outsource the online and the McClatchy Interactive. I'm sure it will save more $$$$$. Guys, it's all about $$$$

Yeah, great idea. Outsource the ONLY segment of your business that is growing. How about stop producing Sports sections that don't have any ads? How about not having Opinion sections? Let's actually look at what people want and read. Just a suggestion.

Better get your resumes ready. The current leadership is dead set on securing the Macon paper while we continue to lose revenue and employees who actually work. Do they honestly think that once Macon is out of the red, they will make sacrifices to help the Ledger? I think not. Now all of production is going to Macon. Soon all that will be here at the Ledger is the press and sales everything else will be outsourced via Macon. That is asinine in my opinion. I give this paper 1 1/2 years before it folds. The only way this place will survive is if it is privately owned like it was 20 years ago. Hopefully then all of the dead weight (Jim D., Bayonet "office manager" (I use those terms loosely),worthless sales staff, managers and supervisors who are over one person, etc.)will be gone.

"Merging both newsrooms will be effective as long as there's a strong leadership from the top."

The problem is the ledger DOES NOT have strong leadership. Valerie is clueless as to what goes on here, Jim Daugherty has his own agenda, Ben Holden only cares about putting Obama on the front page of every paper, and they all take everything that Joe Mendoza in Macon says as gold when he is the biggest moron working for McClatchy. They need to renam the ledger "Titanic" and we hit the iceberg months ago.

If you are naive enough to think that our troubles are local then you should be on the list to go. Your anger should be addressed to the CEO and CFO of McClatchy who have added to an industry wide crisis and a recession with poor fiscal management and decision making. No other board would tolerate the performance record of the leadership of this company.

"If you are naive enough to think that our troubles are local then you should be on the list to go."

If you are naive enough to think we have good leadership here and aren't contributing to the woes of not only the company but the local economy they you need to go. Then again, judging by the demeanor of your comment, you are probably one of the decision makers listed in the previous post. What good would it be to contact someone in McClatchy? Just like here the higher ups use the buddy system to protect each others jobs and pad the books while shitting on those who actually put in a hard days work for the company. That is how it worked when Jody and Pam were here and that is how it is now.

"Have one person do two jobs. It's not mean. It's a wise business decision"

Most people here are doing 3-4 jobs except the sales staff, and they can't even do theirs. Yet even though no new business has been brought in by our "great" sales staff in a couple of years, other departments are getting the axe. Great decision making indeed.

I think the problem may be morale when it comes to this paper. Granted its hard to look at the "bright side" of things in economic woes, but it seems like the management of you guy's paper is is not putting forth a good enough effort to keep the employee's at least understanding of the situation. Also, I think we all know that CEO and CFO's don't give the scrutiny somebody suggests they do to how the leaders of individual papers treat their workers. Actually motivated Sales reps would help your company though.

I can understand the anger in here. However, I must say that I do not agree with the statement below:


"The problem is the ledger DOES NOT have strong leadership. Valerie is clueless as to what goes on here, Jim Daugherty has his own agenda, Ben Holden only cares about putting Obama on the front page of every paper, and they all take everything that Joe Mendoza in Macon says as gold when he is the biggest moron working for McClatchy. They need to renam the ledger "Titanic" and we hit the iceberg months ago."


---- Our current management team is great. I'm not sure why some would say otherwise. Here's what you need to know. Our top management did all what they can to minimize the impact of this needed cut backs. Instead of laying off 20, they did only eliminate 7 jobs. Some of these folks probably were offered jobs within the company or got transferred to another department. Our top management cares about us and there's nothing much they can do whenever the Corporate office tells them "We need to cut more". It's beyond their control. Cutting Pat S. out saved us money. Consolidating Production to Circulation and HR is saving us money. Consolidating Marketing, IT, and HR between Macon Telegraph are saving us money.

These were business decisions that were decided thoroughly and they work.

I think Ben H. is liberal and may agree on Obama's policies. His views and beliefs may reflect on what gets printed on the paper. It would be very sad if this is true. The paper is no longer partial.

Which deparments are you going next to cut more FTEs?

2. Circulation - gradually reduce Circulation work force while we look forward on becoming an Online publication. It's the trend.

3. Mailroom - if going Online.. we don't need that much people.

4. Production - If we stop printing , then we don't need much FTEs as well.

It's only a list. A creative list. Look around, every other Newspaper is going Online. Print business is no longer making sense in this current economy. Thanks to Obama and Bush.

By this time next year, the Ledger will be either online only or not be here at all. Mark my words.

Get out now while you can.

The sales team isn't to blame. No one wants the paper, how hard is that to figure out? It's news is designed to destroy relationships in the community. Readership is declining because people are fed up with it hence advertising in the LE is a waste of $$. Can't blame sales, who wants to buy garbage?