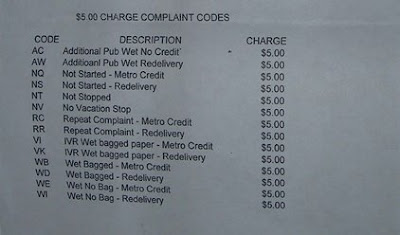 The Kansas City Star and other newspapers have set up a system to penalize newspaper carriers for mistakes:

Being a newspaper delivery person is a tough, 365-day-a-year job.

Long, lousy early-morning hours of trying to find the right address in dark, inclement weather, keeping track of numerous starts and stops for vacations, adding new customers, keeping papers dry, etc., all add up to a difficult line of work.

As if the job isn't difficult enough, now the KC Star and other newspapers are implementing tough new guidelines for delivery folks that will severely penalize them for any complaints---whether valid or not. The complaints can also erase potential incentive bonuses (see below).

The Kansas City Star will be able to deduct up to $5 per complaint from its newspaper delivery agents/carriers due to new terms being imposed on them. It also will impact delivery of Investors Business Daily, Financial Times, New York Times, Wall Street Journal, USA Today, Barron's and the Olathe Daily News.

Carriers today make about 8-10 cents per delivery. However, the new charges can result in a $5 penalty as a result of an "Aggravated Customer," "Wet Paper," "Not Started," "Not Stopped" and other instances.

"This is a blatant attempt to hurt those at the bottom end that are still suffering from the effects of last summer's high fuel prices," said a carrier who wants to remain anonymous.

"Many carriers have left, but many cannot afford to."

According to the carrier, a third party company was created to act as a go-between for The Star and several other financial papers (and most recently the USA Today). These other papers were being delivered by carriers that were making as much as 70 cents per daily copy, however, they are now delivered by The Star carriers for the same rate that they make for delivering The Star.

These kinds of policies (and layoffs) have gone into effect since McClatchy Company bought out Knight Ridder (including the Star) in 2006. Customer service was initially relocated to Georgia and then to India, which means carriers cannot let customers know of things like vehicle problems for bad weather.

"Please, if you can, try to work directly with your carrier," says the carrier.

"Remember they are out there in the middle of the night, often before the plow and salt trucks get to work. They also are the ones calling the police if they notice anything suspicious at 3 a.m."

These bastards went after President Bush for everything and anything under the sun, and would roast any right wing organization that did anything like this.

And where area the unions? Now I know carriers must not be part of the union. But why do this to carriers? WTF are these idiots thinking!

If this type of conduct was brought to the presses attention, boycotts would be the order of the day.

Oh, that’s right, this is the newspapers doing so it’s alright.

Although my WSJ delivery guy is flawless, I now have newfound sympathy for him.

I'm no lib, but WTF are the guys at the top and middle smoking?

What a stupid policy... I notice that spell check wasn't run before printing out that list, though.

The newspaper carriers in KC do not have a union. 6 years ago it was quite lucrative to be a Star carrier. Not only did they do there own billing and collecting for the paper they also received incentive pay to bring in more subscriptions. This was a full time job for the carrier. They were well compensated for their work. In the last 4 years carriers have watched routes be cut in half, lose billing and collecting , fees reduced each year of signing a contract. Carriers went from being paid 1100.00 a week to now being paid 300.00. Now they are going to punish the carrier for things beyond their control.

Very sad indeed. No carriers, to me means digital delivery as they will be gone.

I'd like to charge corporate for every mistake they have made over the last few years.....

Shame, shame on you!

Redelivery expense is very high. Many carriers don't pay attention to messages, requests from customers, and many don't care. If you understood that list, it doesn't penalize for a routine miss, only repeat issues and more serious problems. In most cases, if the carrier takes care of the problem right away, they are not charged. Listen to phone calls sometime. Talk your district manager and you would understand the issues they deal with. Although 70% of the carriers are do their best and are not affected by this, the other 30% are not the cream of the community and cost the paper many customers. When a customer calls the carrier about missed papers, many will argue, call the customer a liar, make up a bogus excuse. Many are unable to hold any other type of job in society, as they lack the social skills to interact with others in a traditional workplace. They are not the representation the newspaper wants to deal with an upset customer. The contract limits what you can ask carriers to do, but the customer still holds the newspaper responsible for the carrier's actions. This type of policy will improve service to customers as the carrier will pay greater attention.

"Many carriers don't pay attention to messages, requests from customers, and many don't care. If you understood that list, it doesn't penalize for a routine miss, only repeat issues and more serious problems. In most cases, if the carrier takes care of the problem right away, they are not charged. Listen to phone calls sometime. Talk your district manager and you would understand the issues they deal with."

It's difficult to deliver a paper to someone when you don't get a paper to deliver.
It's also frustrating to get a complaint every day for a week on a subscriber then you get the start delivery notice. Under these new terms, that would be very expensive.
Phone calls are nice, but when you work all night, how do you expect people to stay up and answer multitudes of calls, yet when we try to call someone, we just get voicemail.

Many carriers have been doing this for years before all the changes in the last few years and had weeks go by with 0 complaints. Now they get pages of complaints and like a shark sniffing blood in the water someone wearing a suit saw a lucrative opportunity.

"Many are unable to hold any other type of job in society, as they lack the social skills to interact with others in a traditional workplace."

Translation: carriers are scumbags and deserve this treatment.

Also, the KCStar has shut down distrubution sites for the paper. So now on the Kansas side, you have over 200 carriers trying to pick up there papers from one location, and get done in time. KCStar at it's finest.

"Redelivery expense is very high. Many carriers don't pay attention to messages, requests from customers, and many don't care. If you understood that list, it doesn't penalize for a routine miss, only repeat issues and more serious problems. In most cases, if the carrier takes care of the problem right away, they are not charged. Listen to phone calls sometime. Talk your district manager and you would understand the issues they deal with. Although 70% of the carriers are do their best and are not affected by this, the other 30% are not the cream of the community and cost the paper many customers....."
It is very clear who ever left this post has never delivered a newspaper. I have been doing this for 30 years. I have met some of the smartest people I know at this (so called) job. Most have a degree or at least some high learning. This person sounds to be some lackey for the Star. I've personally gone from make $65,000 a year to $39,000 a year doing the same route, in just 5 short years. With the cost of living going up as it is that means I take home less then half what I did.

My problem is that I have no way to communicate with the actual carrier. I don't want to complain or cause anyone to be charged. I just want the carrier to use the basket I set up so the neighborhood dog pack won't carry my papers off and chew them to shreds,which the six or so of them running loose all the time do on a regular basis. How can I have a friendly conversation with my carrier and mention the basket that I installed for him?

can you imagine how his night would be if everyone had a basket for him to put newspaper in? getting out of his vehicle 500 to 800 times a night to help you out.

if everyone had a basket then it would be a long night getting out of his van 500 to 800 times a night. just open the trunk of your car in the driveway and if he makes it in your trunk then you tip him for good service

Yes some carriers do not care nor do some d reps or zone managers and it is hard to care when they are constantly raising cost of chargeables by double as to what is listed in some cases ! Depending on who you are! And not to mention the times that there is a mess up in the checks and they don't pay your weekly cheek and will do nothing about it ! But yet a carrier pays a bond and can not get this money back with out full filling there contract but yet sometimes waiting for them to pay the carrier for up to a month! Oh and carriers also must pay a 1$ per week to have a e book that contains their route . This ebook costing may be $80.00 new at most which I doubt not even wi fi so pure profit for the company after awhile oh and mandatory accident and life insurance that we have to carry ! 10yr carrier

How do you contact the carrier directly? They won't give me the name or number? And good luck trying to understand what the customer service person is saying. I wondered if I was talking to someone overseas, and now I know we are.

I know this is an old article but I deliver newspapers in Eastern Pennsylvania, for the past 4 yrs. We get charged $1 per complaint Mon through Sat & $2 on Sundays. Even if the complaint is unfounde3d (they'll never look into it) they'll still charge you money, the customer can literally get away with anything they want, if they want an extra Sunday paper so they can get mmore coupons they'll call & say they didn't get a paper & the newspaper will charge me money, even though I said I was there & delivered it they won't believe me & charge me money anyway. I only get $180 every 2 weeks, complaints can hurt, bad. I also have to pay for bags & rubberbands & gas. If customers knew we're charged for everything they'd think twice about how much they tip, most customers have no clue how many things we have to pay for.

Late deliveries are a home security issue. The paper is "supposed" to be delivered bt 7am. When not delivered near to that time, the paper sits on the driveway all day saying "THESE FOLKS AREN'T HERE...ROB MY HOME". Delivery used to be before 630....now its 830 or later up to today