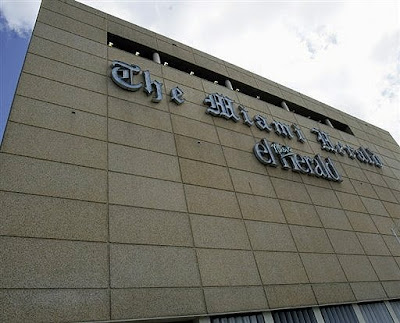 The two top editors at El Nuevo Herald, the Miami Herald's Spanish language sister paper, have stepped down over a dispute regarding mandated layoffs at the paper.

Castello made his position known in a staff meeting on Wednesday.

Castelló, addressing his staff in Spanish, said he resigned because he was unwilling to make the mandated cuts ''whether they are justified or not.'' He said a reduced staff would mean El Nuevo would likely have to share more stories from The Miami Herald.

''In the end, it's going to be something else,'' he said, urging the staff to do their utmost to provide its readers ``a unique newspaper designed for the community, which deserves that.''

Some journalists at El Nuevo Herald have been concerned that the newest job cuts at the newspaper, along with a previously announced move of its staff to The Miami Herald's fifth-floor newsroom, would compromise their ability to cover stories and make editorial decisions independently of the far larger English-language publication. The Spanish-language paper began as a supplement to The Miami Herald, with its staff in the main newspaper's newsroom, before it was spun off as an editorially independent newspaper.

Does this matter in the long run? Seems like this is just rearranging the deck chairs. The Miami Herald is widely believed to be a money loser and McClatchy is trying to sell it. And the departure of the top editors from El Nuevo Herald leaves that paper weaker.

The editors at El Nuevo seem somewhat deaf to the situation happening to their industry.

So what if they have to "share" stories with the Miami Herald. These children need to learn how to share their toys on the sandbox.

This type of refusal to accept the reality of the business world is key to understanding why the newspaper media write the trash that they print each day. They are completely out of touch with the real world.

They live in an echo chamber where their own extreme views are just accepted as "normal" because everyone else around them has the same extreme views.

It's bullshit. They were recalled by Castro. Pruitt has an informational package and some Rice A Roni to deliver.

Some journalists at El Nuevo Herald have been concerned that the newest job cuts at the newspaper, along with a previously announced move of its staff to The Miami Herald's fifth-floor newsroom, would compromise their ability to cover stories and make editorial decisions independently of the far larger English-language publication.

What is the big deal about being independent from their english version newspaper? Would these bozos prefer to go under completely and shut down?

This sounds like two groups of extremist liberals (El Nuevo and Miami Herald) that are having a turf war.

Is this a circular firing squad of reporters/editors who just don't grasp reality?

The San Francisco Treat. Trust me, it's much nicer than what I would figure Pruitt would really like to give the man.

Right, but what does Pruitt have to do with San Francisco?