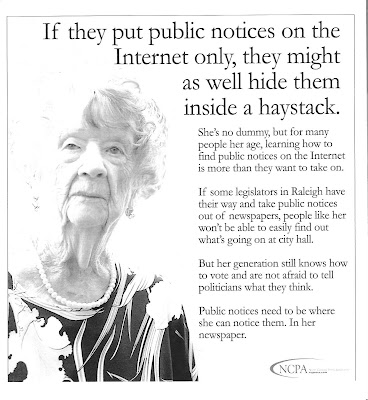 The latest sign that newspapers are losing to the Internet comes from an ad campaign in North Carolina. The North Carolina Press Association is fighting legislation which would allow local governments to post public notices on their Web sites instead of paying to have them published in local newspapers. The NCPA prepared a series of ads to motivate citizens against the legislation. One of the ads, starring an elderly woman wearing a pearl necklace, appears to concede that newspapers are for old people.


I know times are tough, and that reporting staffs have been hit hard by job cuts, but is this really the point the N.C Press Association wants to make — that if you want to know what’s going on at city hall, you have to check the paid notices?

You're overreacting to this ad, which appears to me to be politically savvy. Politicians know older Americans vote. They vote more regularly than younger Americans, and many are politically active, so it makes sense to point out that there's a large voting population that relies on print newspapers for information and that will not appreciate having their public notices revoked. Moreover, the ad is just one of four designed by the N.C. Press Association and is the only one that directly addresses the older readers issue.

Trying to paint seniors as old and helpless people is lame. My grandmother has been on the net for over ten years. She taught me to search for my homework information. She designed and manages a website for her art club. I’ll have to inform her that her older friends are probably missing all her newsletters because they are too old to grasp technology. Geeesh

I am going to e-mail this ad to my poor little old grandmother, and I’ll report back any comments she makes. Warning, she’s been known to use salty words when provoked. LOL

The truth is NC newspapers don't want to lose the taxpayer money they get in the form of ad revenues for the notices.

This is an absolutely horrible ad as any first year Marketing student could tell you. I'll temper my response however as it is a very good indicator as to just how clueless the newspaper industry is.

I keep reading the need for local news is reason enough to save print newspapers. Local bloggers already offer local news up to the minute, no need to wait a few days. What was the question?

Older Americans vote, but this taint about voting. Hello? Most people, who don’t vote USE THE WEB.

“that will not appreciate having their public notices revoked.”

My grandfather just can’t wait for the public notices each day. He totters out the door, limps down the walk, and uses his cane to retrieve his beloved dead tree rag. Yes, it makes his day, yes it does.

Old, old, seniors, listen up, insist on a print newspaper or you will lose your Social Security payments! Scare the old folks, that's a new one!

I don’t think seniors like to be stereotyped. The picture looks more like a nursing home aged senior. My grandparents live in an over age 55 community, and you will never see more active people. They are active, fit, and run a social schedule that would kill me. This ad is way behind the times. My grandparents would take offense to being likened to old, frail, out-of-date fogies.

This ad was written by an industry grasping at straws, but belittling seniors is beyond the pale. I find the ad distasteful, and demeaning.

This just in: No they don't.

No blogger bothers to actually go to the council meetings, school board work sessions, magistrates' offices, or even the state legislature. There's nothing stopping them. They just don't want to do the hard work of doing rounds and building sources. Covering a beat right requires more than 40 hours a week.

I don't blame the bloggers. I mean, who would do all the scut work for free? That's why professional newsgathering is irreplacable.

"This ‘juster in‘: Yes they do, how many examples do you want?"

Some blogger might have the biggest local news (probably with a link to a newspaper), but I guarantee you that there is no blog that will report as much local news as any run-of-the-mill newspaper.

Show me one "example" of a blogger who reported the police standoff with Jeffrey Walker, the sentencing of Donald Glenn Adams, the sentencing of Nicholas Steven Hays and the identification of Shannon Case's body. And that's only a tiny fraction of the local news from yesterday.

I'm not deriding bloggers. They're fine for opinion and sometimes news burbles out on blogs. I'm sure you can cite a few examples.

But in my city no blog has any methodical coverage of anything. If a house is broken into in my subdivision, no blog will report that. They don't do restaurant sanitation ratings. They don't go to the police station to scan the crime reports.

They just don't show up for most stories.

"They don't do restaurant sanitation ratings."

Get real, that is a simple cut and paste. Now, you have insulted everyone! Keep up the good work.

Should the Internet Replace Newspapers for Public Notices?

"In thousands of planning and zoning laws across the nation, official announcements are required to be published in the local newspaper of "general circulation." In an era of newspaper decline and expanding diversity of media, are these laws becoming obsolete? Furthermore, should we be concerned with newspapers at all if a newer, more universally accessible medium is available: the Internet?"

http://www.planetizen.com/node/35272
------
Dozens of articles such as this were written last year, as usual, the dead tree media is behind the times. Way, way, ‘back in the day.’

I especially like the reporter that covers the school board meetings. Being a shill for the teachers’ union is hard work. Real hard work.

Simple cut and paste? Maybe so, but no one's doing it. Terribly sorry for insulting the cut-and-paste community.

As for shilling for the teachers' union? We don't have one.

I suppose there are people who find great plots and hidden agendas in the most mundane community coverage.

Dab the froth off your mouth.

We don't have a teachers' union either, but for some reason, the teachers didn't want students to buy school supplies at Wal*Mart. Odd that?

This just in: No they don't.

No blogger bothers to actually go to the council meetings, school board work sessions,... That's why professional newsgathering is irreplacable.

I don't blame the bloggers. I mean, who would do all the scut work for free?

The problem is MNI and most of the rest of the newspaper industry is giving away their content for free. Instead, MNI and other papers should charge for the content, at least respect their subscribers by charging something for online content. Free is idiotic. It is the content that is worthwhile. But, MNI management just does not understand that.

Someone ought to inform the Newspaper Ass., that age 60 is the new age 50 in fitness. I would relate the news to my grandparents that they are old fogies, but they are in Florida biking thirty miles this morning. Talk about being old hat, YOUR age is showing.

Stick a fork in the commie Globe!

Globe to raise prices to $1.50 daily ‘to remain viable’

The Boston Globe is raising its prices in an effort “to remain viable,” according to a memo to its distributor obtained by the Herald.

Effective May 4, the cover price of the beleaguered broadsheet delivered outside of Greater Boston Monday through Saturday will increase to $1.50 - a 50-cent increase.

The price of the Sunday Globe will increase to $3.50 in Eastern Massachusetts and $4 everywhere else.

The critical role journalists play in a modern democracy can not be overstated.

"The first lady of the United States of America had an amazing, whirlwind week. She traveled through multiple European countries, met heads of state, attended official dinners and concerts, sat with the sick, gave inspiring speeches to children, embraced the Queen, AND she wore many, many different outfits. Lots and lots of people wrote about those outfits—some folks were extraordinarily angry about her sartorial choices. Others raved and wept and basically declared that Mrs. Obama was the best thing that's ever happened to fashion. So, what does it all mean? Why is it important?"

Communities are no longer reliant on just the local newspaper for news. A journalist I know took a job at $19,500 last year. He is expected to attend every meeting of anything, write most everything that is not copy and pasted, and sees his family, almost never. The only thing keeping him there is the awful job market. I dare say, he will look for another field of work once the economy improves. Who wants a job that pays so little to work a 60+ hour week? The pay is getting less, and the hours of work more, you just know top journalists are panting for these local poverty level jobs.

The pay is getting less, and the hours of work more, you just know top journalists are panting for these local poverty level jobs.

I am a 55 years old. I have a masters degree in journalism from Columbia and have 25 years experience as a reporter, feature writer and editor.

I am starting a new job tomorrow. My question is, do I have to call my 19 year old boss at McDonalds "Sir"?

I have seen this same ad on a few sites now, and in each case the comments are disparaging for the ad’s age discrimination. Exploiting old people as technophobic is stupid. Typical liberals, trot out the poor old souls for the cameras. Good grief, who’s idea was something like this?

Newspapers are so toast. They couldn't figure out the internet for 20 years, and we expect them to now?

More evidence of their decline:

Point is, public notices should be capable of being accessed by all segment of society. If NCPA is fighting to keep the goverment from taking over publishing public notices (online or in paper) good for them!!!

Public notices MUST be published by an independent forum. Don't trust your government to keep you informed!!!

8:08...I heard that Pruitt, et al, believe this situation to be related to the recession, and not the decline of the news biz.

That whooshing sound? The clue bus, passing them by.

I loved this woman in TITANIC. I thought she dies at the end- but she is still alive reading public notices in newspapers.