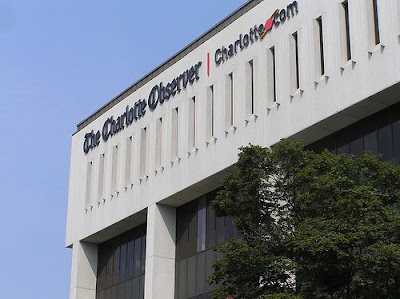 When publisher Ann Caulkins announced in March that 82 Charlotte Observer employees would be laid off, she said furloughs would be considered in the second half of the year if business conditions continued to deteriorate.

Evidently the deterioration has occurred: last night a reader said furloughs were announced in Charlotte on Monday.

They're coming to a McClatchy paper near you - whether ya like it or not. Pretty soon we'll be paying McClatchy to work for their miserable company.

That joke of a guild site in Sacramento (www.beeguildnow.org) is reporting Sac is going to either furlough or burn vacation accumulation (try to figure that one out). The problem is that salaried employees will have to take a full week of furlough and they don't have enough leftovers (loser managers and senior writers who are still hanging on) to allow that to happen. The intrigue never ceases.

I wonder if those dinosaurs up in corporate are going to suffer furloughs like us. When will the family realize that Gary Bob Frank Lynn are from another era that has gone.There may still be time to salvage this replace those retards.

Once bankruptcy is filed later this year, the company will layoff most of its staff, shutdown print operations and go all online. They won't make the revenue, but it will be cheaper once the high infrastructure costs are slashed. Pruitt's gigantic ego is the only thing stopping bankruptcy filings today.

I agree but you forgot one other retard. Hendricks has been a huge failure too,after all these years that bufoon is still leading the failed interactive strategy. No furloughs for those bufoons,only for us.

Does anybody know whether bankruptcy would allow layoffs to be done by, say, workload, talent or even the mere act of showing up for work on a regular basis, as opposed to this lunacy of least tenure?

8:57 AM Bankruptcy Judges probably have the widest latitude of any Jurist there is, but they seldom get into the details of how the carnage is doled out, beyond the management structure. Unions of course are the exception as they often get a seat at the table when it comes to crafting a plan that the judge will accept.

Did you know that the Corporate employees in Sacto (in Gary's office, etc.) did NOT get a paycut like the rest of the employees who weren't laid off? How unfair is that?

I meant to say the employees (not the executives) didn't receive a paycut... you know, the accounting folks, the Corporate IT folks, etc.

11:53, you're wrong...corporate employees did get pay cuts. They were announced in April.

I am fighting for my parking fee for the furlough (or as I call it, forced unpaid time off - FUTO). How can they make me pay for parking when they won't let me work?

What are they telling you about the parking fee? I hope you're successful!

No, you are wrong. I know for a fact that gals in Accounting and Payroll DID NOT get paycuts. So, unless you work there, don't say they did!

I know for a fact that corp IT people DID get pay cuts, starting in April. Corp IT was specifically mentioned in post I replied to.

And in classic McClatchy style, the letters said the cuts would be "x" percent but then they had to come back later and say, whoops our bad, we meant "y" (a larger percentage) so sorry!

Those Corp IT folks up there on their lofty perch are bunch of losers anyway. All of them are overpaid for handing stupid directives down to us. Oh how I hate dealing with the retard up on the 3rd floor that used to be amongst us.