Chart of the day

Who said the Internet would save newspapers?? The latest figures show Internet ad revenue at the New York Times is cratering. 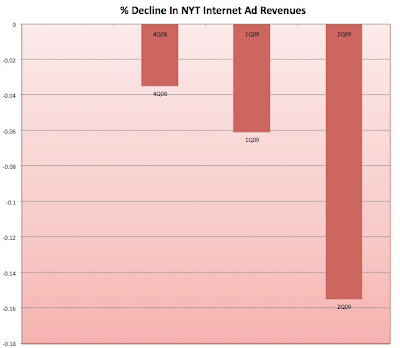 As if the New York Times doesn’t have enough to worry about, with total advertising revenues down 32 percent in the second quarter, its online business is deteriorating as well. In its earnings announcement this morning, the company breaks out Internet advertising revenues of $68 million, which is a 15.5 percent drop from a year ago.

The year-over-year declines keep getting worse, as you can see in the chart above. In the last three quarters the annual decline went from a 3.5 percent drop in the fourth quarter of 2008 to a 6.1 percent decrease in the first quarter of 2009 to negative 15.5 percent this quarter.

Thank you M-Watch. I feel MUCH better now!

McClatchy's internet revenue was down 2Q too. Those McClatchy layoffs announced today will become more widespread in the coming weeks. The more bodies they cut, the better chance for profit and stock increases. Right now it's about $1.40 a share. These idiots have no long-term plan, it's all about desperation and saving the company from bankruptcy.

Say it ain't so! But what about my August raise that "Mr. Anonymous in the Know" says I have coming?

The only "raise" we're going to get is the workload.

The simple question for anyone who uses the Internet: Do you really ever remember the ads you see on the free news sites you go to? Do you click on them? I'm betting not. And advertisers will eventually realize this. And already are.

The advertisers also realize that there is such a thing as Firefox and Adblock.

Why automatically start paying more money when you are "profitable" when you can continue to steal from your employees?


Nope, it was a McClatchy fan fawning over their return to prosperity, profitability and good times. Nice try though.

Maybe they are doing their accounting in Pesos.