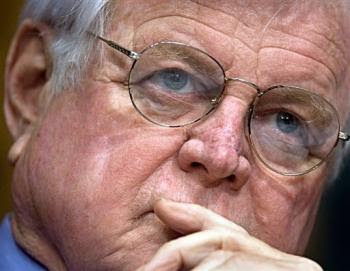 There have been so many failed interventions involving Teddy Kennedy, reporters have trouble keeping 'em straight. From the LA Times corrections department:

Sen. Kennedy: An article in Sunday's Section A about Sen. Edward M. Kennedy's role in Congress' healthcare debate said that Sen. Orrin G. Hatch (R-Utah) had urged his friend to stop drinking after the Massachusetts Democrat's 1969 car accident at Chappaquiddick. Hatch gave the advice in 1991, after Kennedy spent an evening at a Florida bar with his nephew William Kennedy Smith, who subsequently was charged with rape and later acquitted.

...as his loyal friends promptly vote down their plans applying to themselves.

Boy, I hope that girl he left in the car is alright.

Didn't he and Dodd have some drinking incident at some sandwich shop?

Or were they at the whale-pen at seaworld?

They always said good old teddy could drink so much, he’d be better off using an IV-drip. Guess the old commie, fool got his wish

Teddy IS a whale.

Teddy will soon meet his maker. His last cleansing request will be to ask forgiveness for leaving a young girl to die, and killing babies. If he is a Catholic at all, believe me, he will want absolution for these sins, and he knows they are sins in the Catholic Church. I see a large bequest coming for complete absolution.

Teddy and Chris Dodd got tanked at a restaurant and tried to use a waitress as sandwich meat.

How ironic that the nobility of the Democrat Party are a pack of Irish mobsters.

Bobby was always referred to by Lyndon Johnson as "that little shit" and JFK, known as "Mattress Jack" in congress would have no doubt been court-martialed for his incompetent handling of the PT-109 were it not for Daddy's connections.

Oddly enough, Teddy is considered the most skilled legislator of the bunch.

John, haven't seen you post in a bit. Welcome back!

I hear plans are already underway for Teddy's last rites? Another Michael Jackson marathon, ya think?

Several columnists steeped in the liberal media cesspool wrote glowing reports on Walter Cronkite. The columns that had a comments section horrified the leftists. Oh horrors, they read disparaging remarks and the ‘RIH’ initials. Why, it is heresy to not worship at the feet of the great one. They were well into their plans for another spectacle like the Tim Russert funeral. Of course this time, there doesn't seem to be a family member lobbying to take the old fraud’s place.

The comments section I read was shut down, due to hate speech. I see where this hate speech thing is going. So I went back to the archives for this so-called columnist to check his articles about Sarah Palin. You got it, the comments were very vitriol and untrue, but there they are to this day. Talk about hate speech, and the libs don’t recognize it when they see it, hell yes, we need these charlatans to give us their version of the news! RIH liberal media.

Dear Leader can only focus on one act of treason at a time.

Three years after President Obama marched alongside Hispanic and immigrant rights activists, they took to the streets Wednesday to march against him, saying he has betrayed them by embracing Bush administration efforts to stem illegal immigration.

Activists marched in Los Angeles and picketed Homeland Security Secretary Janet Napolitano's appearance in New York, angered over the administration's embrace of an electronic verification system for employers and a program that allows local police to enforce immigration laws.