Craig Nannini, one of the organizers of the Charlotte Tea Party in April, has announced he is running for Charlotte City Council.  An engineer, Navy vet, homeowner, and father of a young son, Nannini says he doesn't like the City Council's record on spending.


Charlotte is going broke. I’m a Navy veteran, so I’m familiar with the phrase “spending like a drunken sailor.” That’s what our city leaders are doing.

Check out his web site here.  Below is a photo of Craig with his young son. 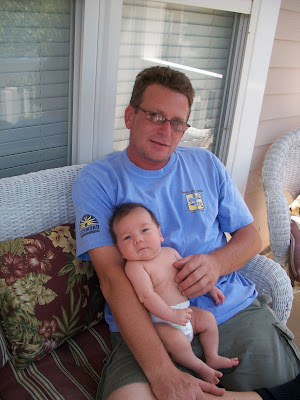 We'll be watching what kind of coverage Craig gets from his local newspaper, The Charlotte Observer. 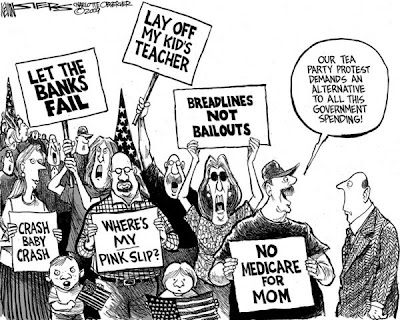 The N & O has done such a disservice to voters for years. They try to destroy the conservative candidate rather than put the two contenders side by side. The last governor, a Democrat and his wife are embroiled in a scandal. That should have been headline news, but it was spiked until after the election, and the Democrat won based on the dislike of President Bush, ginned up by the corrupt media. North Carolina used to be a fiscally conservative state, but it is quickly joining the other blue states spending beyond their means on bogus environmental problems. NC natives will tell you the liberals that ruined their home state are moving into NC, and are now ruining it.

*** and the Democrat won based on the dislike of President Bush, ginned up by the corrupt media.***

Sigh. You guys never learn to stop blaming "the corrupt media" and look at your own problems and mistakes.

And you, 2:31, never stop denying the obvious. But then again, most liberal arts majors never were that good at things like rational problem solving or cause and effect.

Gimme a major that does not require all that icky math.

I don't have to know economics and you can't make me!

Bush is an evil force who will bankrupt this county, who supresses the media, submarines democracy in the middle east and gives bailouts to the bankers...O wait...that's Obama. Dang Faux News this is their fault.

The News and Observer has been a radical leftie paper for years whose early coverage helped frame three innocent lacrosse players for a rape that never happened.

I haven't heard any of these right wingers complaing that The State in Columbia had e-mails from Gov. Sanford to his lover for several months but never published a story about them until Sanford came out and admitted his affair. Just that left wing liberal media covering up for a Republican Governor.

The State couldn't publish them because they had no way of verifying that the emails were authentic.

I guess that's why The State never went after Obama's birth ceritifcate.

Now compare that to the ADN who claimed that Trig Palin was not Sarah Palin's daughter.

What fairy dust have you been sniffing? No leftie media has EVER covered up for a republican. Are you serious????

Hmmm. I would've thought that biased, left wing, liberal media like the McClatchy owned State would've published them whether they were verified or not.

And give us a link to one story, just one where the ADN claimed that Trig Palin was not Sarah Palin's child. Just one. Bettcha can't do it. You can spout off that the ADN said it but you have absolutely nothing to verify it. By the way Trig is a boy, but why let facts stand in the way of a good lie.

The ADN is a disgrace, it used yellow journalism, and outright dishonesty to vilify their governor. They printed rumors, and then said Gov. Palin should answer the trumped-up rumors. The same Democrat lodged ethical complaint after ethical complaint that was not supposed to be published until legally accepted, but the ADN published them too soon, which was illegal. The liberals are afraid of Gov. Palin, and to this day they write disparaging articles that have no substance. Refresh me on why sane people don’t care if the current batch so-called journalists disappear from their lives.

****The ADN is a disgrace, it used yellow journalism, and outright dishonesty to vilify their governor. They printed rumors, and then said Gov. Palin should answer the trumped-up rumors. The same Democrat lodged ethical complaint after ethical complaint that was not supposed to be published until legally accepted, but the ADN published them too soon, which was illegal.****

Well, here is an initial election rundown from TCO that does not mention Craig's candidacy at all, and I know the reporter knows about it.

I hoping this in advance of a solid solo feature on his campaign, an objectively newsworthy topic. In most markets.