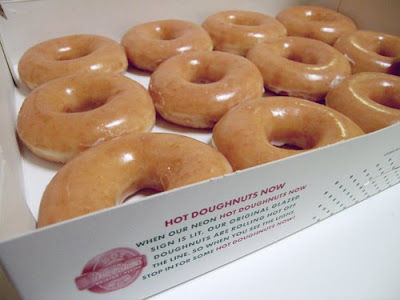 Forget Truth to Power: now that Obama is president, it's Donuts to Power. White House press secretary Gibbs recently held an invitation-only briefing in his private office and McClatchy brought the donuts.

With that, White House press secretary Robert Gibbs launched the first press gaggle of the Obama presidency to be held in Mr. Gibbs’ private office. Only a select few reporters were invited – well, more like 50, per Gibbs deputy Bill Burton, who sent out the emails early Friday. About 20 showed up for the 9:45 a.m. session. No TV cameras. Krispy Kremes on the table, courtesy of Margaret Talev of McClatchy News Service.

Readers of this blog might remember Margaret Talev is Obama's occasional shopping pal.

"Ok, Lets get our stories straight."

"Let’s all make sure were on the same page"

WOnder if McClatchy transferred Rosenberg up there to get her out of the Florida heat?

I haven't wondered since the anchors of ABC, NBC, CBS, and CNN all got caught in a meeting deciding on exactly how they would be reporting leading up to the 2004 elections.

I will never understand how they avoided prosecution for operating as a cartel.

DO THEY HUDDLE TOGETHER TO SPIN STORIES LIKE THIS?

Conyers Sees No Point in Members Reading 1,000-Page Health Care Bill--Unless They Have 2 Lawyers to Interpret It for Them Monday,
(CNSnews)

During his speech at a National Press Club luncheon, the chairman of the House Judiciary Committee, Democratic Congressman John Conyers (D-Mich.), questioned the point of lawmakers reading the health care bill.

“I love these members, they get up and say, ‘Read the bill,’” said Conyers.

“What good is reading the bill if it’s a thousand pages and you don’t have two days and two lawyers to find out what it means after you read the bill?”

DEAR LEADER AND THE PRESS TRY TO SPIN, HOW DO WE WHITE HOUSE RACISTS, SPIN ANOTHER RACISTS RACISM?

Obama Pal Henry Gates: "As Always, Whitey Now Sits in Judgment of Me"

Does Barack Obama have any close friends who are not race-baiting, anti-white, America-haters?

He wrote this in his Yale yearbook, via WTOP:

To his eventual embarrassment, he wrote in his Yale application:


"As always, whitey now sits in judgment of me, preparing to cast my fate."


"It is your decision either to let me blow with the wind as a nonentity or to encourage the development of self. Allow me to prove myself."

Blaming "whitey" for anything that happens in our life: that's this whole administration in a nutshell, divisive and ugly.

Obama and Gates surround themselves with this theology and that is how they have lived their lives.

This is not Christianity. This is hate.

Gibbs is pretty smart. Chum up with the reporters, keeping them away from revealing the truth of what is really in the so-called Health Care Reform Bill!

Power to power....truth be damned.

Krispy Kremes on the table, courtesy of Margaret Talev of McClatchy News Service.

Did she talk about Rosenberg and bias, or simply take additional marching orders from her DNC masters?

Margaret Talev of McClatchy News Service is a whackaloon for sure.

...Marching orders, The Word...all turn to page 57 and repeat after me. The White House knows who they can count on.

Krispy Kreme A.K.A. K.K. should be renamed KKK donuts because they are golden brown on the outside and WHITE on the inside!!! The official donuts of the Whitey House.

(Oh I hope Michelle don't wanna go 'an paint up the Po' 'ol White house now. Dat be a shame if un it was to change colors.)

Mainstream media is a laughing stock, yet they still take themselves serious. LOL!

That picture looks like a dozen journalist bending over to take another Obama screwing.

THANK YOU FOX! (From Gibbs and The White House Gang)

Ya think Barack Nifong sent a thank you card to FOX for NOT covering his propaganda conference.

There is no owner’s manual for the Oval Office, no school to learn how to be a president.

Perhaps most challenging for any new president is learning how powerful that megaphone really is.

During the Bush years, the left would pounce on any verbal misstep, and use it for maximum advantage, which they still do it for any conservative.

You guys/gals are so much fun to watch. Thanks for all the laughs each day. It's hard to believe that there are people like you with such empty lives.

I say, give them all the donuts they can eat, fat clogged arteries and soggy brains seems like a winning combination for these liberal skanks.

I don't see the speech control as your liberal wanderings carried you to this blog and you are allowed to post and comment on us right wing conservs. The only time I see posts deleted is when they contain offensive language. I guess the truth hurts some Libs. so much they get their shorts in a bunch and have to emphasize their points by using offensive language. I am glad 12:22 finds this entertaining. She must have an empty life also 'cause she drives by here often I would suppose. I know, it is just to see what the other guys are doing!

Take off your rose colored glasses and you might see the REAL color of our president! OOPS!, it keeps changing! Black, White, Red...

Ever notice that it is only liberals that defend McClatchy or the news media in general. I wonder why that is.

If you have such a FULL life, what are you doing here, lying like your master, are ya? Being a compulsive liar takes a good memory, perhaps you will relay that information on to your top liar-in-chief.

Until she changes her tune, you can always tell it's her because she always end her posts with, "You need to get a life", "You have no life" or a derivation thereof.

Also, if she's really having a bad day, and doesn't feel particularly pretty, she talks about us being short, balding or having a small appendage.

Below is her song, she sings right after she posts any of the above.

♫ I feel pretty,
Oh, so pretty,
I feel pretty and witty and bright!
And I pity
Any girl who isn't me tonight.

I feel charming,
Oh, so charming
It's alarming how charming I feel!
And so pretty
That I hardly can believe I'm real. ♫