Anti-Israel bias at the AP

Aussie Dave looked through the AP's rule book and found this:

AP rule of caption writing #175: When Arab civilians and Jewish civilians are involved in an altercation, refer to the Muslims as “residents” and the Jews as “extremists.”

Check out the actual AP caption for the photo below:

"Israeli border police officers listen to a Muslim man after scuffles broke out between Jewish extremists and Muslim residents next to the house where a Palestinian family was evicted from on Sunday, in the east Jerusalem neighborhood of Sheikh Jarrah, Wednesday, Aug. 5, 2009." 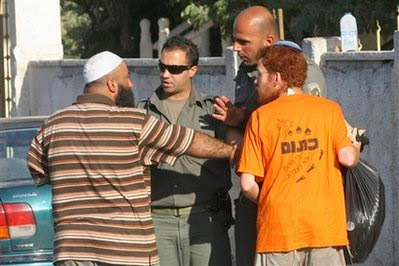 As a whole, AP 'journalists' are a group of self idolizing elitists who do not want 'to make a difference' in the world that is positive.

The difference they seek is the result of the constant erosion of the original tenets of their profession - to be honest and to report news events honestly without bias.

The difference is they seek is self promotion, promotion of the educationally diseased beliefs they have been taught, and adulation from the leftist communists to which they pander.

The AP's rule book for President Bush must have been a whopper! I would really like to read the slight of words they used for eight years to demean him.

The AP suffered a large layoff, but it wasn't nearly enough. They need to vanish entirely.


Sure did. They learned that lesson the hard way, but at least they learn their lessons. It won't happen again.