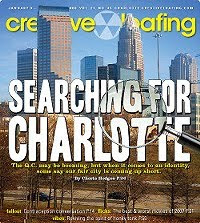 The chain operates in Atlanta, Tampa, Chicago, Washington, D.C., Sarasota, Fla., and Charlotte — with a combined a weekly circulation of more than 400,000. The company also operates seven Web sites.

Atalaya said in court it doesn't intend to close any of the papers.

So for the near term at least, the Charlotte Observer will continue to have a print paper competing for local advertising.

There are actually two competitors, counting the Loaf. Carolina Weekly Newspapers runs several papers in Charlotte neighborhoods. The news section is crap, but the sports coverage is awesome.