Bookstore owner freaks out over dangerous conservative in the Hamptons 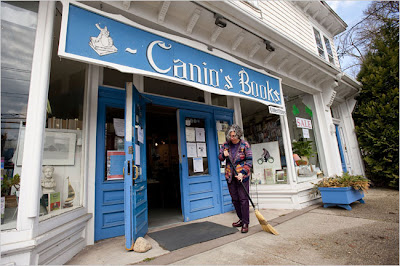 The frightened owner of Canio's Books in Sag Harbor called police last week over an angry phone message from a caller asking about Mark Levin's book.

Maryann Calendrille called police on Sept. 16 after hearing a phone message at Canio’s Books on Main Street from a person who was angry that the store didn’t have a copy of Mark R. Levin’s “Liberty and Tyranny: A Conservative Manifesto.” The caller ended the message by saying, “Have a nice freakin’ week.”

Above is a photo of Maryann Calendrille (credit: Laura Pedrick/New York Times), co-owner of Canio's Books in Sag Harbor. Apparently this place is well-known as a lefty bookstore in the Hamptons.
.
I'm not sure what Calendrille expected the police to do. She may have thought she was doing the community a favor by turning in a domestic terrorist.
.
The other co-owner of the store is Kathryn Szoka; her Facebook page tells you what you need to know about the bookstore.
.
Hat tip: Dan Riehl
.
.
.
on Tuesday, September 29, 2009

Ironically, the leftist bookstore owner, has no clue what Free Speech is?

Most of the best sellers are conservative non-fiction books by Maltin, Levin, O'Reilly, Beck and Dick Morris. She can't be in business long ignoring those books!

If you literary world isn't bigger than a handful of conservative books I feel sorry for you.

And we all are terrorist now. The Dept. of Homeland Security has outlined the need to target outside the typical Middle eastern demographic domestically. That basically is everybody else. And the DHS and the Obama Admin ENCOURAGE spying and telling on your neighbors. So she's doing exactly what is expected of her outlined in DHS policy.

The STASI has spoken (Rolling eyes)

Conservative books sells - big. As a whole book sales are expected to be down 20 percent by year's end. Liberals don't read - many of them can't even speak English.