If you get your news from McClatchy, you might have the idea Joe Wilson's “You lie" outburst resulted in countless throngs of tourists canceling planned vacations to South Carolina to protest Wilson’s supposed racism/disrespect.

That's what the Dems and the elite media want you to believe.

But a look at the actual developments in South Carolina shows the tourism industry in that state is showing signs of boom, not bust.

One example: Carnival Cruise Lines just announced a series of new cruises originating from Charleston in 2010.

Carnival will operate five-, six- and seven-day trips from the passenger terminal in downtown Charleston to the Bahamas and Key West, Fla., beginning May 18.

Jim Newsome, president and CEO of the S.C. State Ports Authority, joined representatives of the Charleston maritime community, the city of Charleston and the tourism industry in making the announcement.

You haven't heard about this because it doesn't fit the Dem/fringe media narrative.

By the way, the cruises from the Port of Charleston will be aboard the massive 2,056-passenger Carnival Fantasy, pictured below. 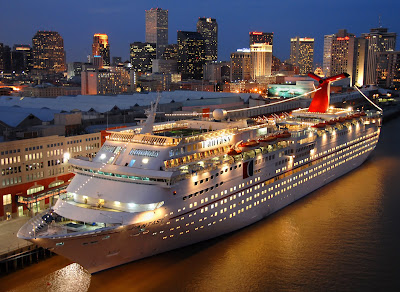 McClatchy readers haven't gotten the real story because McClatchy reporters have relied on DNC-inspired press releases (like this one) instead of reporting actual news.

One reason I never buy a DNC/McClatchy paper, unless it's lying about in a coffee house and I want a good laugh about its content or size (postage that is)

Are you seriously equating Wilson's outburst to new cruise line service in South Carolina? Are you insane?

This blog is a joke.

Oh what I wouldn't give for a thoughtful, informed, fair, nonpartisan troll for McClatchy.

If you don't like it, feel free to leave. In the meantime, could we please have this trolls constant garbage deleted on sight.

McClatchy breathlessly reported hundreds of tourists were canceling planned vacations due to the outburst. Here is a McClatchy report:

"State and local tourism officials are being flooded by emails and calls from people across the country, saying they won't vacation in South Carolina because they're upset by GOP Rep. Joe Wilson's outburst at President Barack Obama.

The officials said that a number of the out-of-state e-mailers have said they've taken beach trips for years in Myrtle Beach, Hilton Head and other South Carolina resort areas, but don't plan to return."

Turns out the McClatchy accounts were nothing but hype. Cruise on!

9:53 I don't know that a blog has much responsiblity to be fair or unpartisan (sic).
But...let me assure you that McClatchy is not
Serious
Thoughtful
Informed
Fair
or
Unpartisan (sic)

Newspapers of course violate their fundamental purpose for being when they abandon these tenets. McClatchy has become a tool for one political persuasion and the truth or fairness be damned. Your outraged and overemotional tone belies the core issue: you cant' get out of your own limited perspective.

The question is: Has tourism in SC been affected by the Joe Wilson incident? If not, then Mcclatchy is at least incompetent and more likely lying. No pun intended.

9:53 is like all marxists. Those who disagree with the position of the state and our leader must be insane.
Does he suggest shock treatments for dissent?

I will vacation in South Carolina this year. Just like I did last year. We thought of it as our family vacation. Who knew it was an act of political defiance.

Remember when this blog had actual news about McClatchy and not just absolute nonsense? Those were good times. Bottom line is that SC tourism will be unaffected by any of this. If people based there vacation spots around the actions of SC politicians, no one would go there. From Sanford to Wilson to way back with Strom, there's a horrible track record.

10:12 I can tell you're really distraught about the changing content of MW. However, I'm betting if it was only devoted to posts about McClatchy you'd post something like that punk cartoonist posted the other day demanding that we broaden our interests. Bottom line, kiss our ass and go someplace else if you don't like it here.

I haven't gone by "10:12" in forever.
Now, why would I want you to broaden your interests when you've nestled into a nice balance of ignorance and crazy?
Love the site.