McClatchy's stake in a massive explosion in India... 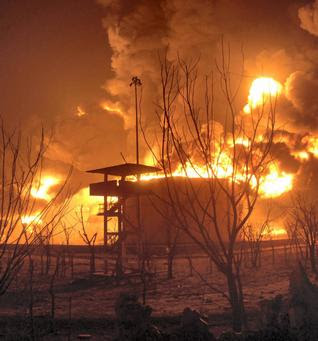 The massive explosion in Jaipur, India which killed 13 and injured approximately 200 people on Thursday has a McClatchy connection... apparently Infosys, the company handling offshore financials for several McClatchy papers, has been evacuated.

Word is that the offshore employees were in the building working when the explosion took place and had to be evacuated.

I understand some emails have been circulating around McClatchy with more info about the potential impact to McClatchy. Forward the emails to me and I'll post 'em.
.
.
.

Did anyone think about things like this happening when they moved half our jobs overseas?

3:44 - But couldn't this have just as easily happened in the US. An accident is an accident.

No doubt if they manage to pull this off, McClatchy may see that hey, we don't need India or all those people we let go - our skeleton departments can handle it all. So long as they work around the clock, that is.

What about the issue of a liberal paper, always touting jobs for Americans, off shoring American jobs?

Its their own fault. Outsourcing the poor finance department to India, dumbasses!