Meet Greg Packer, the media's favorite "man on the street" 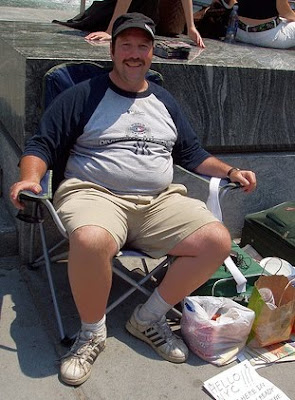 Greg Packer has been quoted by reporters more than any other average person, hands down. A 2004 profile explains:

He's not just another face in the crowd at concerts, book signings, and sporting events. Somehow, over the course of 10 years, one man has managed to become the media's go-to guy, quoted more than 100 times in various publications, including several prominent newspapers. Greg Packer is the "man on the street."

Packer, 40, of Huntington, N.Y., arrives early to media events. His latest accomplishment: being 15th in line in Washington, D.C., to pay his respects to former President Ronald Reagan. "I'm the best person to come to — anywhere," says Packer. "I always give time, and I always have an answer." While Packer says "honesty is very important to me," he does admit that about 5% of the time, "I'm making stuff up to get in the paper." A Boston newspaper, for example, quoted him as saying he had a ticket for the 1999 baseball All-Star Game there when he really didn't."

At times the media can be gullible, but they have to take people at their word," he explains.

In June 2003, the Associated Press circulated a memo instructing its reporters not to quote Packer in any more stories, saying the media had been over-relying on him. Conservative columnist Ann Coulter has deemed him "the entire media's designated man on the street for all articles ever written." Sheryl McCarthy, a columnist for New York's Newsday, said, "The fact that Greg Packer's quotes have turned up everywhere suggests that man-on-the-street interviews are worthless."

Have you met his brother, Fudge?