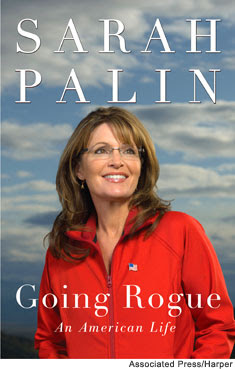 I don't want her as my president but she is still Hot! I wish she was my intern...

I like the no-so-subtle color tones of the cover - red, white and blue. Subliminal messaging, anyone? I'm buying the book. And, yes, she's very hot.

Not hot, not buying the book. She's one of the most idiotic people I know.

3:24 PM Yeah, we know she isn't popular among gays and welfare fanatics.


I already ordered it. Can't wait to read it.

3:24 Somehow I find that hard to believe. I'm betting you know a lot of people who are far, far, far more idiotic than Sarah Palin (the hottie Sarah Palin).

She can be my President any day.

Palin's running for prom queen, right? Being "hot" is a requirement for such. But instead, some of you are suggesting that Palin become president because she is "hot." I want a president who's "smart," not "hot." Anyway, Palin can't become president because - though he's one of the founding members of Monty Python - he's a British national. Oh, I thought you meant Michael Palin ... Oops, my bad! Sorry! ...
Time to buy me a copy of Going Rouge ...

5:41... and I want a president who does not have, as his primary goal, the destruction of this country.

We've already got the "prom king" in Obama and he's been a total bust. Why not the prom queen? Couldn't screw it up any worse.

5:41 Osama bin Obama's crew is pretty bright and it's the biggest pack of loons that has ever assembled in DC inside of government (the possible exception of the staff at the Smithsonian).

It cost a lot to fix stupid. Frankly i dont think it can be fixed. Especially when people dont understand what stupid is and continue to follow stupid. Stupid is stupid does.

But, as for blaming Bush, well, it's deserved:

Who sent us to Iraq? Obama? Nope. Bush.

Massive deficit: Yup, he who traded Sammy Sosa when he was a Rangers owner: Bush.

And keep nodding when listening to Limbaugh ...

"It cost a lot to fix stupid."

If we're being honest here, it's costing a lot to make things worse.

Did you seriously believe Obama when he assured us that by passing his porkulus, unemployment would not go over 8%???

You really believed that???

"But, as for blaming Bush, well, it's deserved"

As a US Senator, Obama voted FOR all of Bush's spending.

Palin's book is a waste of paper pulp and natural resources. Think of all those Alaskan trees she's killing and pumping all that Alaskan oil for her own benefit. What a waste!