There's a reason people call it the "lame stream media"

Would it be too much for the mainstream media to point out a staged photo-op?

But none of these media outlets mentioned that the White House had to hand out lab coats to a number of the doctors in attendance who showed up in business attire. Apparently trying to drive home the image of medical professionals applauding the President, the White House would
not start the press conference until all of the doctors were dressed in the “spiffy” outfits, in the President’s words.

Many major media outlets declined to note the botched attempt to enhance the ‘doctors-support-the-plan’ image of the event, playing right into the White House’s objectives.

Below is a photo of a White House aide passing out white coats to those who hadn't worn one to the photo op. (Photo credit: New York Post) 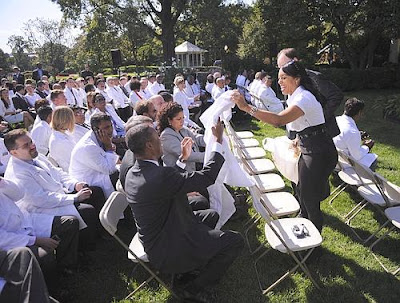 Remember how the media howled over the "fake turkey" that Bush supposedly carried on his surprise Thanksgiving Day trip to Baghdad a few years back? The press had a different posture toward that president than this one. (BTW, turns out the supposedly fake turkey was real, as the NYT eventually admitted.)
.
.

These leftist media types really are the enemies of the American people and democracy itself and should be treated accordingly.

No worse than the Tea Parties.

This was a typical pr move that clearly was over the top. I didn't care about Bush's turkey, or this. It's what you accomplish. Given the conservative slant of this website, or course this will be a negative. But that's cool, there's a lot of good McClatchy news between the anti-Obama cartoons.

Obama's Attorney General, Eric Holder, has apparently hired a cadre of left-wing, Democrat campaign bloggers to troll through the Internet looking for news stories and blog posts that denigrate the Obama agenda.

After such websites are found it is the job of these secret lefty bloggers to leave comments that come to the support of Obamaism in the comments sections.

It seems that Eric Holder has created his own little propaganda unit in a valiant effort to become the Bloggi Riefenstahl of the Obama era.

As reported at The Muffled Oar, a blog that first broke the story of Holder's secretive blogging unit --dubbed the "Blog Squad" by blogger Isaac Muzzey -- Holder has housed this unit in the Office of Public Affairs at the Department of Justice.

It also appears that former John Edwards staffer Tracy Russo is part of this special unit.

A site called whorunsgov.com reported back in May that DOJ hired Russo to do "media outreach for the whole department." It is, according to whorunsgov.com, the first time such an effort has been made at DOJ.

My brother-in-law was in Iraq when President Bush visited. He got stuck outside the dining event and wasn't able to get any of the Thanksgiving dinner because of the delay. He ended up eating an MRE while he was on patrol. I asked if was still cool to have the President visit. He replied that it would have be a whole lot cooler to have gotten a hot meal. I guess if this had been reported at the time you 'baggers would have said it was another example of the liberal media. Or maybe it was just the truth.

Another good reason not to trust the NYT or the other lame streamers. Not even the trolls can defend the unbalanced treatment.

Good to see we've got Joe Wilson coming aboard.

Of course, with all these wonderful White House propaganda ministries in place, what will the Democrats do if the Republicans take the Presidency/Congress in future elections and continue to utilize them? Or has this even occured to those who are building these infrastructures? Probably not. I doubt those in the current administration see themselves losing ANY elections in the forseeable future. Wish I were that sure about tomorrow.

It's not easy to get a genie back into a bottle once released.