Finally!.. thanks to new arrangement with the WSJ, the KC Star production facility will print a popular paper 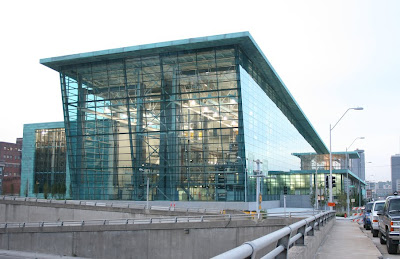 The Kansas City Star, by contrast, lost more than 18,000 subscribers in the 6 month reporting period that ended September 30th.

Maybe the Star can learn some things from its successful partner.

And of course the liberal Marxists at McClatchy see this as a total victory.

I guess even Melanie Sill types
realize that Marxist parasites require a viable, capitalistic and healthy host in which to feed from.

Their highly complex business plan may be to begrudgingly assist a paper who they are ideologically opposed to, then like their acolytes at SEIU and ACORN, unionize every job (highly doubtful) then go on strike, and make the monetary demands they clearly can’t with all but bankrupt McClatchy.

Sometimes you gotta take a second job just to pay the bills.

That's a nice building. I bet they could sell hamburgers in the lobby.

I understand it's quite the target for folks who own BB guns. The good news here is that the decent folks at The Star will still have a job so they don't have to suffer for McClatchey's radicalism.

What do you know. They lost 18,000 subscribers and they will be printing 18000 copies of the WSJ with not a single line of Scar copy. That is what I call progress.

So will the Journal be renaming the Star? Mark's Printing? I got it...Three Wheels Quick Print. "We print on the run"

Correction, the Star will finally be PRINTING a popular paper. They will still be PUBLISHING the same old leftist garbage.

8:10 is correct. The headline needs to be corrected. The Star is still the same load of crap it's been. it's only printing a good newspaper.

Let me get my barf bag out. It's called the new business model. It's a huge and lucrative commercial printing contract that will --YES -- keep people in their production jobs. What's not to like? It's not politics, it's the ECONOMY, stupid.

It's a huge and lucrative commercial printing contract that will...


There is nothing huge or lucrative about it. It isn't even an entire bus run and will not account for even a single job.

Melanie, I know, I know, "It's just that darn ECONOMY!"

But maybe it's also something else too?


"There's no dispute that The Bee has a liberal editorial page on most issues, though not all matters, and has mostly endorsed Democrats.


Is that why you’re now printing the WSJ, instead of more DNC talking points no one is buying?

They were going to start printing road maps, but found out the presses only recognized left turns.

It used to be, when it was new, but now the Sprint Center down the street offers a larger target with even more glass to shoot at.

That isn't why we be shootin up Sprint Center. Dem white peoples doan lemme be wearin mah pants around mah nees.

It be kool at da Star. Mah bro Pork Chop got a 6 inch inseam. He be trippin.

Hah hahh hah! You're talking like a black person! But you're white! Black people are funny because they're so stupid and violent and they eat chicken and watermelon. Black people! Let's all mock them!

Lokeman? Did they rehire you?

High paying jobs are most important in the current economic situation.
Most of the companies in India and there are lots of job openings in various indian cities, which provides high salary.