"Peace group" gearing up for exciting talk by McClatchy reporter 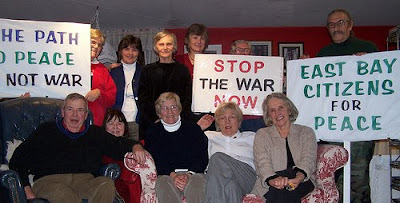 An energetic little "peace group" in New England is busy preparing for a talk this weekend by a McClatchy reporter.

The East Bay Citizens for Peace, a left-wing activist group in Bristol, Rhode Island, is hosting McClatchy reporter Jonathan Landay for a Saturday talk on US abuses in Afghanistan.

I'm not sure if the left-wing activists in the audience will be wearing tie dye shirts and hemp jewelry, and I don't know if there will be marijuana smoke wafting through the air. But the old folks in the peace group seem to be looking forward to hearing about the awful things the US military is doing in Afghanistan. Here is the announcement.


Jonathan S. Landay of the McClatchy Newspapers’ Washington News Bureau, just back from a two-month investigative tour in Afghanistan, will speak in Bristol, RI in early November on the direction of the war and its effects on the United States and the nations of central Asia.

He has titled his talk and its theme “The Stakes in Afghanistan: The Debate We Ought to Have.” Landay will then take audience questions on his remarks. The event, sponsored by the East Bay Citizens for Peace, is scheduled for 8 pm Saturday, Nov. 7 at the Old State House in Bristol. Suggested contribution is $5 at the door.

The undated photo above (via laonsfsolidarity) shows the folks in this group look a lot like aging hippies and potheads.

Looking at their website, this far-left group has sponsored events like peace vigils (2nd Saturday of the month, 11 AM to noon, across from the Post Office), peace rallies, fund-raising events for Dem candidates, and anti-war lectures by other left-wing activists. (List of EBCP sponsored events here.)

...those darned activists! who do they think they are ?!?

Landay, to his credit, has written some of the most powerful combat articles I've ever read. He's a giant talent who goes in with the troops and gets in the middle of intense fire-fights. I'm certainly not advocating these whackjob peacenik crazies, but I'd go to hear him speak any day of the year.

Yup, this hombre is damn good and his stories weren't anti-war in tone. He told them from the grunt's ground-level point of view. Blood, guts, bullets, evil Talibaners, low on ammo, no air cover, scared and crying for mama. He's too good for McClatchy who can't afford what he commands in pay and benefits.

The photo of these losers is classic Comedy Club. Why is it you can pick out the peace and love bunch just by the way they look - wimpy men, librarian women. Ultra libs must be a genetic thing.

He and McClatchy better watch out.

The New York Times doesn't like reporters (or even analysts) talking to "advocacy groups". (http://www.nytimes.com/2009/10/28/business/media/28fox.html)

Neither does "Mark Feldstein, an associate professor of journalism at the George Washington University" who calls such activity "pretty shameful".

I wonder what you paranoidal far-righters do at your day jobs. Hate Hate Hate. You have some right to caution against attacks and spam. That's your weapons of choice in the Roved-led propaganda machine. If u have no program but hate, that is all you far-right paranoids can do. from Save Our Constitution From Brown-Shirts

wanting peace is such a loser hippy mentality. if you dont want to go to war and kill people you dont know with the same problems as you, then why dont you go smoke your dope and listen to the Beatles you hippy.