More on McClatchy's $77 million pension fund loss due to fraud 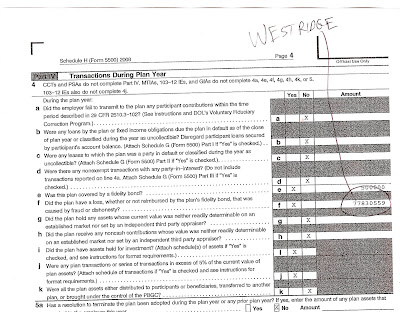 Note: see updated information at the end of this post.

A former McClatchy employee has forwarded some information about a serious issue involving the company's pension fund that has been kept quiet.
The information was tucked away inside some retirement information the company recently sent out.
On Schedule H Form 5500, line 4f, is this question:

"Did the plan have a loss, whether or not reimbursed by the plan's fidelity bond, that was caused by fraud or dishonesty?"

The company checked YES and listed the amount as $77,830,559. (See photo of the form above.)
The employee says he contacted the corporate office and was told this has been previously reported and that company attorneys are working hard to get some of the money back. So run along now.

A little research shows the two owners of Westridge -- Paul Greenwood and Stephen Walsh -- have been charged with defrauding more than two dozen institutional investors out of $667 million. The two are facing criminal charges in New York. Documents filed with the SEC claim Greenwood and Walsh dipped into the funds to buy lavish homes, a horse farm, cars, and exclusive collectibles such as Steiff Teddy Bears, which cost as much as $80,000.

I have no details yet on McClatchy's involvement. But the $77 million in fraud would be a sizable chunk of Westridge's fraud -- well over 10 percent.
Hey McClatchy -- show some respect to the people with vested pensions and lay out the information.
Start with some transparency. Who approved investing pension money into Westridge? How much was invested with Westridge? Which directors are on the pension committee? What kind of due diligence was done to make sure the Westridge fund was legit? Are the people who chose Westridge as an investment still making investment decisions for the pension fund? What did the directors receive as a result of their relationship with Westridge -- invitations to polo matches, wining and dining, yacht trips, gifts? Seriously, this should be completely disclosed.

And what is the status on recovering the funds?

Reminds me of the great and powerful Oz, but with his pants around his ankles.

What, too busy transcribing DNC talking points to see the thief stealing your money from your back pocket?

And wasn’t some troll here a few days ago bragging about how his McClatchy investments were doing alright?

McClatchy really does emulate the hard left in all matters. (Melanie Sill was right)

They constantly complain about the right, but like Dear Leader, when it comes to themselves, no transparency whatsoever.

Further, it takes this blog, which they despise, to call them out on their own malfeasance.

5:44AM - Investments = 401K and MNI stock. I would never consider a defined benefit plan an investment. You have zero control over what happens with a pension. The only plus to the pension is the PBGC guarantees you'll get something, even if the company fails.

The answers to all the questions you ask will not even be worth a cup of bad coffee.

Sure, it sucks. But there are quite a few investigators (real ones) looking at this...

Truth is you have no power. So, stop trying to speak truth to power.

How big is the McClatchy pension fund? What percentage of the total does $77 million represent?

That would help to put this in perspective as to the actual potential to affect pension payments to retired workers.

Who was in charge ?

Amazing to think that this fraud and MNI tryig to cover it may have led to many of the decisions that screwed up the lives of many good honest hard workers not as much the downturn in the economy.

Now here's a story. So which MNI newspaper reporter has the balls to go out and investigate and report on this? Let's go, show you have a pair!

As another poster just said, I'm curious as well to know if this is the REAL reason behind the massive layoffs (errr, "separations" as MNI likes to put it) at MNI, MNI Interactive and MNI newspapers.

What a completely disgraceful company this is all around! I'm embarrassed to even put the MNI newspaper I previously worked for on my resume, so I simply don't.

A wasted three years of my professional life. Now this.

Great job! I'm sure the remaining herd of sheep that are still left working for this garbage are proud. Ugghhh.

The value of the pension fund went from approx $1.3 billion in 2007 to $888 million in 2008. The loss in value includes the writeoff of $77 million due to the fraud.
This is a huge dollar amount when one considers the lost earenings potential of this money over time.

My take is that McClatchy Watch isn't a reporting operation, it just posts items related to McClatchy. That said, thanks for enlightening us to the pension fund losses. Those "professional" reporters should be digging into this one.

thnx for reporting this awful news. another good reason mcclatchy watch is a valuable site. thnk u!

Someone should send this to the local Sacramento media. They will eat this up.

Hell, maybe we can make some money buy shorting the stock.

McClatchy stock is taking another dive this morning.

Didn't MNI papers publish story after story of how the rich socialites that lost money in ponzi schemes where stupid and greedy and that they deserved getting taken ?

I wonder how much MNI was offered in % return and who got and how much the kickbacks where to those who made the decision to invest ?

Like I tried to tease out here, there are some very basic unanswered questions about this $77m. number.

Is that the TOTAL amount MNI had with Westridge -- or just a guesstimate of what MNI will eventually lose?

Bowling Green Univ. back in March tried to cash out all the $15m. it thought it had in a "low-risk, cash-enhancement fund" with Westridge. As of two weeks ago BG was saying it'll take YEARS to figure out what it will get back.

It didn't take much reporting to find this. All you had to do was read the information that is sent to every person who is in the pension fund rather than toss it apparently the way 5:50 AM, 7:33 AM and 7:46 AM did.

6:50 AM is correct the 401K is money you have invested and control. The pension fund is money that the company contributed on behalf of the employees and the employees have no control over those investments. The PBBC does guarantee the money for vested employees.

To all Miami Herald employees:

Today we are announcing a reduction plan that will result in the loss of 24 staff positions and the shortening of the full-time workweek for departments directly involved in newspaper production operations.

The move is part of our ongoing effort to ride out this unprecedented period of economic turmoil. While we are seeing some signs of improvement on the horizon, we expect operating conditions to remain challenging through much of 2010.

The reduction plan includes operational savings and the elimination of temporary labor and open positions. The job eliminations are spread across all of our divisions. Although many of these will occur through involuntary layoffs, there also will be opportunities for employees to voluntarily elect a severance package where reductions are occurring in work groups of two or more employees. If enough employees do not take the voluntary option, then the work groups will be reduced according to least tenure.

Employees affected by this reduction are being notified immediately and provided with information about a transition package. If a voluntary option is being offered to your work group, you will receive written notification with additional information today.

The shortened full-time workweek to 37.5 hours will affect all hourly staffers in Prepress, Printing Operations, Electric Shop, Machine Shop, Packaging and Transportation. Employees who work 37.5 hours in those areas will retain their full-time status for health insurance, vacations and other benefits. There will be meetings beginning shortly for all employees in the Operations Division.

As in the past, every effort has been made to minimize the number of layoffs. At this moment, when signs of an economic recovery are still mixed, our actions will help us navigate what we believe will be a period of moderating revenue losses in 2010.

These are difficult decisions, and we realize how tough it is to stay focused on the important mission we share at MHMC. We have come a long way, and we thank you for your continued dedication and hard work.

If you have further questions about the plan, please direct them to your division vice president.

Charlotte offered buyouts to all its newsroom people on Monday. It's beginning to look a lot like Christmas at old McClatchy again.