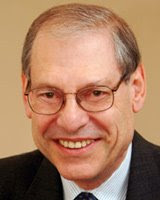 
Many undecided voters have a common concern when they size up Barack Obama: his inexperience.

"I have nothing against Obama. I just think John McCain has more experience," said Steve Viernacki, an Ashley, Pa., restaurant owner.

Experts say that such worries are overblown.

"Experience matters, but its importance is terribly overstated," said historian Robert Dallek, the author of recent books about Presidents Kennedy, Johnson and Nixon.


Notice that Dallek uses the word judgment.  That happens to be an Obama talking point.   But it's probably not a coincidence: it turns out "scholar" Robert Dallek isn't a non-partisan observer -- Dallek is an unabashed Obama supporter. In fact, he is a member of "Historians for Obama,: which is something of a loose organization of historians who have signed a document stating they have endorsed Barack Obama for president. You can read the endorsement here.

Oh, another thing -- Dallek's wife Geraldine is a donor to Obama's campaign, according to this web site.
.
McClatchy reporter Lightman cheated readers by not disclosing information about Dallek's commitments and allegiances.
.
But Lightman isn't the only McClatchy reporter turning to Dallek for pro-Obama spin.  Dallek turns up in a July piece by Margaret Talev on whether Obama's lack of military experience will hurt Obama in the election. Talev turns to Dallek -- Talev calls Dallek a "presidential historian" -- for his opinion:


Presidential historian Robert Dallek said in an interview this week that military experience in a candidate "is useful, it's valuable" but "it's no guarantee of anything. What's much more important is judgment."

What matters more than experience, scholars said, is an ability to hone and trust one's instincts. "Give me good judgment every time," Dallek said.

Dallek is a supporter of Barack Obama, to be sure, but he's also an accomplished scholar capable of objectivity. If he were to say something totally partisan and off-base and wacky, he'd be chased out of his profession.

The point is McClatchy didn't identify Dallek as an Obama supporter.

IMO the entire article reads like an Obama infomercial.

Trying to win the election on "judgment" isn't going to work either. He has about as much "judgment" as he does "experience"...

It's easy to argue Obama's judgment is horrible - he listened to anti-US rantings by Jeremiah Wright for 20 years without batting an eye, he thinks the surge in Iraq has failed (but he wants a surge in Afghanistan!?), he thinks he can ignore the advice of General Peraeus.

More: he thinks he can reason with Ahmadinejad, he is embarassed Americans don't speak French, and his choice of friends (Ayers, Rezko, Frank Davis) is suspect.

And don't get me started on Obama going to Germany and criticizing Americans.

It's no surprise who you are NOT supporting, perhaps you should disclose that as well. As far as the article itself, I see where there were several other scholars quoted with a similar opinion to Dallek's. They were able to find a restaurant owner who supported McCain, probably after many hours of trying to find a scholar that didn't agree with Dallek.
To jwm at 10:39,
Perhaps they should have asked you for a quote. I noticed you didn't disclose your anti-Obama stance on your article about this article either. I also wonder who the other scholars quoted are supporting, I would think if you are trying to make a point about one it would be important to know how the others plan on voting. Maybe we should ask KC, he is also listed on that historians for Obama site.