Yard sale at McClatchy: historic Fort Worth Star-Telegram building up for sale 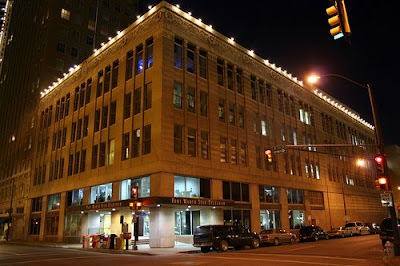 The Fort Worth Star-Telegram announced Sunday it intends to sell its historic building in an effort to reduce costs to the financially-strapped newspaper.

The Star-Telegram will soon put its historic downtown office building up for sale as the newspaper continues to cut costs.


The move comes on the heels of the newspaper selling its four-story annex building, an adjacent parking lot and two other downtown parking lots Friday to the Fort Worth Club.


Walter Littlejohn, general manager of the Fort Worth Club, did not return phone calls Friday. But he said recently that the club will use the property for parking. There were about a dozen potential buyers for the property, at Taylor and Fifth streets.


Gary Wortel, the Star-Telegram’s publisher, said that when the annex building went on the block, he received a couple of inquiries about the newspaper’s main building.


The newspaper, which has reduced its staff through attrition and layoffs in the past few months, is reassessing its space needs. Some positions that were cut were based at the newspaper’s offices in Northeast Tarrant County and Arlington.


Wortel said the building, at the northwest corner of Seventh and Taylor streets, is "bigger than we need" and may be too old to keep pace with rapidly changing industry technologies. But he acknowledged the building’s history.


"We want to assess interest level. If we’re going to move, we want to do it for the right reasons," Wortel said. "We won’t move if it doesn’t reduce costs and meet our strategic objectives related to consolidating other facilities."


The four-story building was built in 1920 and designed by the Fort Worth architectural firm Sanguinet and Staats. Amon G. Carter, then the publisher, moved the newspaper into the building from offices at Eighth and Throckmorton streets.


The building was expanded in 1940 and 1947; the last major addition, built in 1967, was a four-story building north of the original building. A walkway between the buildings bridges Sixth Street. The combined facility totals about 184,000 square feet.

Hat tip: West&Clear. Photo via Flickr
McClatchy is in desperate financial straits; look for McClatchy sell off assets at most of its newspapers.
.
Related:
Readers choose official Gary Pruitt theme song: "It's the end of the world as we know it" by R.E.M.
on Monday, September 15, 2008

Take a good look Modesto Bee Employees, this is in the minds of corporate I'm sure.

Any bets on what or who's next. Every week something to look forward to.

McClatchy has a big site in Modesto that is an obvious candidate.

The N&O is already selling a property it owns in Chapel Hill.

Modesto Bee takes up a whole city block in a prime downtown location. Across the street they also have a big parking lot and service garage with fuel tanks and pumps. County court house and jail is just 2 blocks away and they are looking at building a new courthouse...HMMMM?
Now if they can sell their press to make room for the inmates...They have been having a "fire sale" of a lot of extra equipment and spare parts from various machines...just pocket change though...can't pay off near term bank notes with yard sale proceeds!!!

so sad this historic building is up for sale A. Carter is prob turning over in his grave as we speak. god bless his soul...only if he were here today....