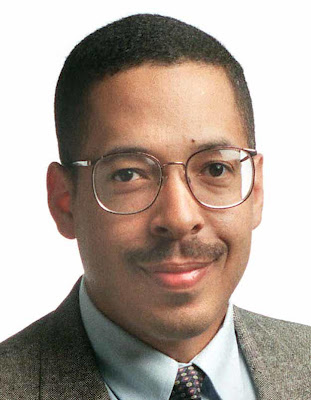 "I have about six jobs. I am responsible for The Star's philanthropic efforts in the community, I do more than 200 speaking engagements on behalf of The Star and I am co-chair of the companywide diversity initiative. I will be picking up duties that include staff development and community forums," Diuguid told Journal-isms.

"I am to remain on the editorial board as its only minority member but with no public voice.

"I have been writing a column for The Star since June 1987. I got permission to write the column once a week to add perspective to the neighborhood news section that I edited back then. The column grew to twice a week as I took on writing for an additional section, and then in May 1994 the column became a twice a week metro column. I started doing a third column not long afterward by continuing to write for one of the neighborhood news sections. In September 1999 I moved to my current position, writing two columns a week. In April 2006 the second column was killed. In the time I have been writing a column, I have never missed an opportunity to write a column — not for holidays, vacations, sicknesses or for deaths in my family. No box has ever run saying my column will return whenever."

Duiguid's outlandish October column was linked by Drudge Report, and was a topic on the Rush Limbaugh radio show and multiple blogs. Here's an excerpt from the goofy column that implied McCain and Palin are racists:

"McCain and Palin have simply reached back in history to use an old code word for black.  It set whites apart from those deemed unAmerican and those who could not be trusted during the communism scare..."

The "Journal-isms" article by Richard Prince did not give a reason for Diuguid's reassignment, and publisher Mark Zieman was said to be "on vacation."

There's the problem "over 200 speaking engagements". The KC Star is a printed media. HE thought he worked for TV/Gannett

People are to hard on Lewis. This racist piece of shit has contributed more than anyone in exposing The Kansas City Scar for the national disgrace that it is.

It should be noted however that this lowlife Farrakan wannabe lied in his interview with the race oriented, so called "Journalisms" blog. He says that he is the only minority on the editorial board and has no voice. Bullshit! Rhonda Chriss Lokeman is still there and has more voice than anyone execpt for hubby, Mark "couldn't get a date" Zieman.

Keep up the good work Lewis. With guys like you exposing McClatchy for what they are, parakeets everywhere will be living high off the hog. To think, we were led to believe that the Japaneese were on the cutting edge of toilets. A bird just hasn't lived until they crapped on a KC Star.

Please increase the number of speaking engagements too. The more you open your yap, the more people that know you for what you are.

How is Rhonda Lokeman on the Editorial board. I thought she didn't work for The Red Star.

Either way, what they are doing is outright fraud.

Palindrome writes:
“Equal education is unlikely to happen in the U.S. if whites with the historical privilege of getting the best won’t share with others.”

I think Duiguid might be the code word for dumbmud.

Lewis also claimed that all the mean emails he received about his "socialist=racist" rant were from white people----not sure how he would know that, but its worth mentioning, because it goes directly to his racist leanings.