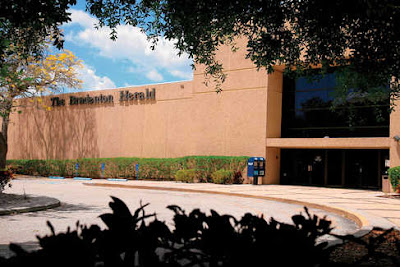 The Bradenton Herald will eliminate 15 positions and implement wage cuts. Here is the story from the paper's web site:

The Bradenton Herald will eliminate 15 full-time positions, and most of the remaining staff will see their salaries reduced as part of the company’s expense reduction plan.

The staff learned details Monday about the cuts, which are part of the reductions announced earlier this month by the Herald’s owner, McClatchy Co. Many other McClatchy newspapers already have announced job cuts, with the expected total to reach 1,600 jobs in efforts to seek at least $110 million in savings over the next year.

Confirmed. I'm not certain how many people were laid off because the publisher, Bob Turner, outright refused to tell us who, exactly was laid off and from what departments. We had a meeting at 4pm and were told about the layoffs. We still have to resort to the rumor mill to find out who has been cut, but one of the most talented people in the newsroom, a photographer, was cut for sure.

On the impending collapse of print newspapers in America Gerard Vanderleun sums it up for me as well as I think about half the country who read newspapers only reluctantly and wont be sad to see them go:

"What we will never hear (from failed newspaper managers & editors) is that their editorial policies and news slanting were part and parcel of their demise. We will never hear about the willed insults, slights, and snubbing of fully half of their potential circulation pool. Journalists and editors write a lot about "taking personal responsibility" when it comes to others. You never hear them write that about themselves. There's no mea culpa among liberal newspaper journalists these days. There's only 'The Internet ate my newspaper.'"

What a hoot to think that liberal vs conservative slant killed the newspaper business for MNI. Most readers can't even spell those words. They want to read the sports pages and see who got killed in their neighborhood. And what a hoot to think that hidebound, compliance-driven, provincial, risk-averse McClatchy is ultra-liberal. If I wasn't so sick of the conservative bellyaching on this site I'd be laughing.

I was at the same meeting as the other person who commented here regarding the Bradenton Herald. Bob Turner, the publisher, told us 15 positions were eliminated and of those only 8 people had to be laid off. The other positions were gone due to attrition. The Director's and Publisher took a 30% pay cut. Everyone else took between 2.5% to 5% and 1 week furlough. 75% off all money saved was done before people had to be laid off. The positions gone were: 1 reporter, 1 photographer, 1 ad services clerk, 1 traffic coordinator, 1 cashier, 1 press manager, and 2 that are unconfirmed as they are on vacation.

FYI - the photographer was indeed "cut" but he volunteered to be cut (because he does not have family).

As for politics, give me a break. Money is green, blood is red. When the chips are down, I don't care if you bend left or you bend right, you can still bleed and you can still be evicted for missing a mortgage payment.

Why people think business owners (large or small) are any different is beyond me.

Reporter wasn't cut, but a copy editor was.

"And what a hoot to think that hidebound, compliance-driven, provincial, risk-averse McClatchy is ultra-liberal"

Well said. It's a lumbering, slow moving dinosaur on a good day.

Photographer is married. I would consider that a family.

Still - the photographer voluntarily asked to be considered for the reduction in staff. Subsequently, he was chosen to be cut.

Just talked to the photographer and he was not cut "voluntarily."

Last 2 to go at the BH...a p/t IT person and an Inside Classified Sales Rep that did more than her share of work and always offered to do more - and was nofited by a phone call while she was on vacation trying to bond with her new grandchild - how cruel was that for being notified?

I personally cancelled my subscription with the Bradenton Herald due to there ultra liberal editorial policies as they used to be fair and balanced but that changed years ago also almost all members of my church cancelled as well and with over 2500 members that had to be over 1000 subscriptions cancelled so I think Gerard Vanderleun may have a valid point.

I looked this morning for local update on motorcycle accident online, 3 ads for Clinton, and two bashing Trump. Don't try to convince me this paper isn't ultra liberal!