This is pretty funny.

An ad touting the many benefits of subscribing to the Herald includes a claim the paper comes with a Life Magazine supplement on Fridays. 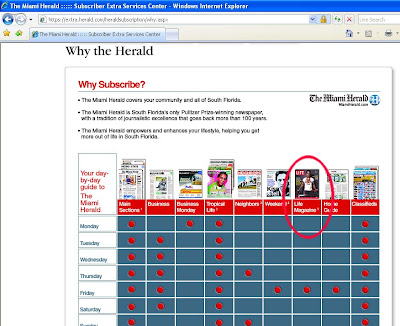 That's the kind of sh*t that happens when you fire your entire marketing department. Worthless and weak are what most MNI papers have become. Too bad Pruitt still gets to keep his nice, cushy job.
Jay Fredrickson 253-370-9575

They pulled this off the shelf from the last time they toyed with the idea. I can't remember which paper I saw with that very same ad, but it wasn't Miami. In fact, it may not have even been McClatchy.

Greetings Jay, good to know you're still around the business. It's been a long time!

I know about the lack of staff leading to "outdated info" goofs like these.

The free community paper I work for belongs to a regional association of such papers, which we heavily promote with our filler ads--and which, due to some other member papers being owned by paid papers and other market factors, has lost some members in the past several months (editions which were dropped from their parent groups, combined with other editions in the same group, and an individual one owned by the paid paper in its market that was closed by the paid paper).

Our Regional Ad Specialist (the rep who handles relations between the paper and the network) can't always keep up with the changes in membership and circulation to get those changes to Graphics so they can change the ads--especially since we've lost the equivalent of two full-time people from a front office of six in the past two years, with only a small decline in revenues (since our industry isn't hit as hard as the paid papers; we are owned by a parent company comprised of almost all paid papers, though, so we have company-wide mandatory downsizing, I'm sure). And, once Graphics GETS the changes, actually updating all the ads is on an "as we have time" basis, since they ARE just filler ads.

If there's a discrepancy between a specific stated by the ad and what the network actually offers, we simply have to explain the current, correct specifics to calling customers. It hasn't been a huge burden; we usually have to do a lot of explaining about how the network works to customers, anyway. When I WAS the Regional Ad Specialist, it hurt my pride personally, though, since I'm rather the perfectionist.

What we've tried to do with our latest updates is concentrate on creating and using self-promotion ads for the network that use fewer specifics and more rounding, since the readers always call us to ask, anyway.

'Course, that nice, big, full-color self-promotion ad with a picture of the discontinued section and a full column in the chart dedicated to the benefits of it--that's embarrassing.