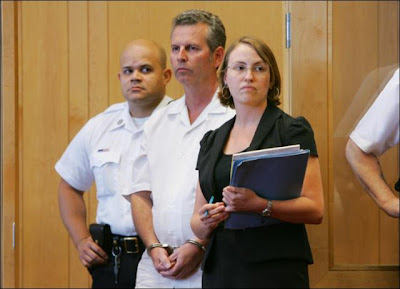 A veteran sportswriter for the Union Leader of Manchester, N.H., is facing two felony charges of deriving income from prostitution.

A longtime sports writer for the Union Leader newspaper has been suspended after being arrested earlier today for pimping out a prostitute at a Marriott hotel in Andover.

Kevin Provencher, 50, of Manchester, N.H., was scheduled to be arraigned this afternoon in Lawrence District Court on two counts of deriving support from a prostitute. He was picked up in New Hampshire earlier today.

The Union Leader issued a statement: ‘Mr. Provencher has been a valued employee for many years. He is innocent until proven guilty. However, given the nature and seriousness of the charges, he is suspended until further notice.”

Though the article says a Felony PIMP charge, I think based on the industry he works for, he has a good defense.

And like the Miami Herald’s Ms. Rosenberg, probably just took his job a little too seriously.

Given that the media’s has whored, lied and prostituted themselves shamelessly to the DNC for years and years, this guy simply took it to the next level, pimping for another class of people.

In fact, had McClatchy’s widened their participation in its generous Plasma TV advertising incentive plan, this gentleman might not have criminally strayed.

Everyone, be sure and keep your eye on Jason Whitlock. Word is he is walking funny.

Also, the Mark Flattery case in which she asks for more child support because she involuntary lost her job by marrying the boss is a real hoot.

Without the photo of the whore this thread is useless.

I inquired as to that and the answer I got was that they didn't maintain records of traffic violations. They said there were just too many to be able to keep up.

I took it to mean that it would cut into profits if they had to hire another data entry person.

See what Gary Pruitt is forcing his workers into.....

I have no idea if this guy is guilty or not, but Carol Rosenberg is guilty as sin.

I want to be this guy.