Will the Anchorage Daily News be irrelevant when Governor Palin becomes Citizen Palin? 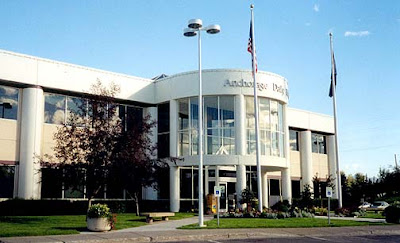 The Anchorage Daily News is going to miss not having Sarah Palin as Alaska's governor when she becomes a private citizen later this month.

Palin drove more traffic to the ADN's web site --an unheard-of 928% spike in unique visitors last September -- than any other topic. Over the next 10 months the ADN went all Palin all the time -- usually following far-left talking points about Palin. The ADN even assigned reporters to investigate the loopy theory that Sarah Palin didn't give birth to Trig. All the while, the ADN's web site enjoyed all-time highs in visits.
Of course, ADN insiders are whistling past the graveyard and pretending they aren't worried about losing Governor Palin as a topic. Tim Lindell has this:

"I chatted off the record with a high-ranking staff member of the ADN -- the person felt that the ADN would do fine, returning to its roots as a local newspaper, and attracting enough national interest with Alaskan stories, like volcano eruptions, to sustain the organization..."

But Tim believes the ADN is already becoming irrelevant:

"... it's gratifying to me that untold effort and resources dumped into the ADN to denigrate Governor Palin, whether in countless poisonous comments or ink expended by PDS-suffering opinion columnists, has been a wasted campaign. This stuff was aimed at undermining any possible re-election campaign for AK Governor, and at depressing her favorability ratings at home. It's all now irrelevant."

"The ADN, and the anklebiters, have only a couple more weeks of relevance. They're attacking full-bore while they still can. After that, they'll only be useful for background info and for attacks on Governor Palin's Alaskan legacy -- unless they can get on top of a new "scandal", like Todd Palin's second cousin once removed getting a speeding ticket, or Piper having an overdue library book. Because God knows that they've already expended all the ammo they have, and are reduced to recycling the same old memes."

The ADN will still publish articles on Palin -- but they'll mostly be wire stories. Or an occasional ADN interview with Palin. The ADN doesn't have the resources for reporters to follow her. The ADN has been cutting staff and consolidating resources. The ADN recently moved their employees out of the top floor of their building -- the floor with the mountain views -- to lease that space out.

The bigger question is this: Will Palin be relevant any longer?

Poor ADN. Not only missed Palin's big press conference, but now will pay the price when she resigns. No one, not even the left, will care what its reporters and editors have to say.

It's hard for crabs to keep up with barracudas.

Motto/Mission Statement: To be Alaska's best source of news and information, enhancing the lives of Alaskans.

Major Awards: The Anchorage Daily News has the distinction of winning two Pulitzer Prizes for public service. The first one was in 1976, The second one was in 1989...

Let see that's over 20 years and 33 years ago. Yep, keeping it relevant!
Although to their credit: In 2008, the Daily News was presented with the Ernie Pyle Award for human interest writing.
Maybe there is hope for them yet.

No one, not even the right, will care what Palin has to say.

If she is the best that the repubs can come up with then Obama, as bad as he's been doing, has nothing to worry about.

"If she is the best that the repubs can come up with then Obama, as bad as he's been doing, has nothing to worry about."

As unemployment approaches double-digits amid record deficit spending...if you honestly believe Obama has "nothing to worry about", you are a bonafide imbecile.

///As unemployment approaches double-digits amid record deficit spending...if you honestly believe Obama has "nothing to worry about", you are a bonafide imbecile.///


Of course! He's been president almost seven months! How much time does he need to fix the whole mess Bush left him?

Palin has a much brighter future than any "journalist" still working at the ADN.

At a minimum she will always be able to make her mortgage, drive a nice car, put her kids through school and buy groceries, which is more than most classically trained professional journalists will be able to do, even as an assistant manager at McDonalds.

"He's been president almost seven months! How much time does he need to fix the whole mess Bush left him?"

Wow. Mindless talking points auto-response. Congrats on your originality. Did you copy and paste this?

Unfortunately it's the only daily in town so it will remain relevant as a newspaper. However, as more and more citizens become disenchanted with the Democrat monopoly of the federal government, and the resulting destruction of our hard fought for liberties, McClatchy papers will probably go down for the count.

...Wow. Mindless talking points auto-response. Congrats on your originality. Did you copy and paste this?...

You seem to do a lot of copying and pasting of right-wing mindless talking points yourself, based on your posts for the last several weeks.

This post is just another example of how skewed this blogger's viewpoint is. The ADN will be relevant to its readers no matter where Palin is or what she does. Jeez.

ADN still resting on a 20 year old pulitzer. By that standard, GM is a great company and Bernie Madoff is a stand up guy.

In his seven months Obama has taken an inherited temporary mess and done his best to make it permanent.
His plans are a wreck and the economy is poised for another downturn because of his lousy management.

Obama doesn't have a clue. He's hoping the economy eventually will right itself like it always has - and pronto. Otherwise, we're all screwed and especially Obama.

"You seem to do a lot of copying and pasting of right-wing mindless talking points yourself, based on your posts for the last several weeks."

Really? Please provide examples, or be honest enough to admit you can't.

...Really? Please provide examples, or be honest enough to admit you can't....

Are you kidding??? Blaming the economy on Bush has been an Obama talking point virtually every day since he was elected, used countless times by him and his minions, and repeated by you.

Here's one of about a million examples:
http://www.youtube.com/watch?v=v7eMcSy8wgc

I can't. Look man, I'm just looking for a handout. I lost my job and now no one will hire me because my paper hired a bunch of people who didn't really have an education. Now everyone in town has a, "Do not hire" policy for everyone who worked there.

Give me a break.

the ADN was relevant long before Palin, and will be long after. this post smacks of a jilted journalist hating the game, and taking it out on the player...love me daddy love me.

but that's just a rumor.

I guess that's why their readership keeps declining by significant jumps. The Audit Bureau of Circulations recent report shows a 5.52% drop in the Anchorage Daily News daily circulation and a 10.12% drop in the Sunday circulation in just the last six months. Imagine what it will be in September when the next 6 month period closes.

Print circulation decline has nothing to do with Palin, you are obviously out of state or you'd already know that.

Loss of staff + loss of content = you do the math.

And of course ignore the web traffic growth (even during non-Palin days), since it doesn't support your argument.

I just don't get the newspaper haters. Hating on McClatchy Corp? Sure, they've done a number on all of us, that's what corporations do...but the individual newspapers with reporters, photographers, editors working way more than 40 hrs a week for modest pay to tell stories about local issues of their community? Shameful.

Your narrowminded attitude is embarrassing. You've obviously been hurt, and now you're lashing out. But at the wrong people, and in a misinformed manner. You eat your own kind b/c the people really responsible for this mess simply don't care about you, and you're desperate for attention from anyone, even the innocents. Love me daddy Love me.

That being said, it's a blog that merrily dances on smoldering corpses, so what can you expect? Besides expecting it to not be around this time next year...