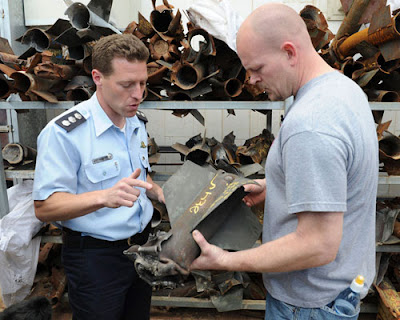 Joe the Plumber has been in Israel just a couple of days but already he is bringing important info to Americans. And upstaging the professional j-school reporters. Here is a Reuters account:

Covering the conflict for PJTV.com, a U.S. conservative website, Joe Wurzelbacher was in the southern Israeli town of Sderot on Sunday, a target of rockets from the Hamas-ruled Gaza Strip, and defended Israel's 16-day-old offensive.

"I've seen some very bad press about Israel," said Wurzelbacher, a colorful figure in the U.S. presidential campaign in which defeated Republican John McCain cited the Ohio plumber as an example of someone who would be hurt by Democrat Barack Obama's tax plan.

"Israel is being attacked and they're defending themselves," Wurzelbacher told reporters. His remarks were interrupted by an alert for an incoming rocket which sent him dashing to a concrete shelter. No one was hurt.

When he's not whining that Israel won't let him into Gaza (see here and here and here), McClatchy's Nissenbaum can be counted on to give readers the Hamas line, such as complaints about Israel using phosphorus bombs, or bogus stories about Israeli soldiers firing on ambulances, or Israel refusing to allow dates into Gaza. (I'm not joking about Nissenbaum doing a story on dates -- see it here.)

I can only guess why Nissebaum is in a tizzy over Joe. He might be sneering at Joe the Plumber because Joe didn't go to journalism school. Or, maybe Nissenbaum is worried Joe the Plumber's pro-Israel stance will expose Nissenbaum for being a weasel when it comes to standing up for Israel.

Via Pajamas Media, here is an excellent video of Joe in action:

Video of Joe the Plumber coming under missile attack (free registration required)
.
Above photo (AP/Moshe Milner) shows Joe the Plumber during a visit to the Israeli city of Sderot.
.
on Monday, January 12, 2009

The only surprise here is that a backroom McClatchy boy like Dion Nissenbaum, would leave a safe barroom bunker long enough to even see Joe was there. That is what really pissed him off, a good afternoon nap shot to hell.

Someone like Joe, trying to be a real journalist, would be foreign to him. Interest in Joe’s articles must drive a pretend war correspondents like Boozerbomb to drink, and write more dreck of course.

If you actually read Nissenbaum's posts, you get the idea he is staying inside his apartment watching Al Jazeera and CNN on TV. And probably drinking.

Joe the Plumber is the biggest A-hole to come out of the 08 election...and that's saying something right there.

Nissenbaum is going mental over Joe the Plumber. http://washingtonbureau.typepad.com/jerusalem/2009/01/joe-the-plumber-in-israel-ban-media-from-reporting-war.html

Let’s write one of those famous mean nothing polls, and blast it out as important news.

What name do you recognize?
1. Dion Nissenbaum
2. Joe the Plumber

Who do you trust to be truthful?
1. Dion Nissenbaum
2. Joe the Plumber
----------------------
Joe Wurzelbacher as been on the news scene a few month, and is well known already. Nissenbaum as been rejiggering the news for how many years? And, who knows him? I am guessing one man represents the new media, one IS a dinosaur.

He is entertaining, he says what he thinks, and he gets more info out than Dion Nissenbaum and his fellow J-school handwringers.

He is entertaining, he says what he thinks, and he gets more info out than Dion Nissenbaum and his fellow J-school handwringers.

Aren't reporters supposed to be objective? Joe's quotes don't make him seem that way.
As a plumber, though, I guess he's used to feeding people a line of sh*t.

Why isn't your blog as good as the Gannett blog? Were you a bad journalist?

The Joe the Plumber Derangement in the MSM guaranteed that they'd rend their garments and scream to the world about this.

Joe gets all sorts of free publicity for Pajamas Media. Simon, you magnificent bastard!

Michelle Malkin has been right on the ‘Joe the Journalist’ story. She provided a link to this Jerusalem Post article:
-Joe the Plumber is here, and he ain't happy-
Excerpts:
Samuel Wurzelbacher of Ohio, aka Joe the Plumber, arrived in Sderot at noon Sunday to [show local and foreign reporters how to do it right.]

"You should be ashamed of yourself," he told foreign reporters.

"Do you think this is normal, the way you cover this conflict and [give away information to your enemy?"] he asked the journalists that gathered around him.
http://tinyurl.com/9ettf8
---------------------
Joe, Now don’t be going and upsetting the McClatchy boys. [Breathless, They might even be Knight Ridder Boys, Gasp.] Telling them the truth would be the foreign to these so-called foreign news reporters.

Too bad this had to be at the bottom of a good article:
“AP contributed to this report.”

Israeli comment:
Joe’s a great guy and he speaks “dugri” (Hebrew for “in your face”).

Did you listen to Joe's report? It's truly an embarrassment. I understand problems with Nissenbaum but I sure don't want to replace him with Joe. I just want good unbiased news.