So far, Americans aren't buying the "stimulus" bill the Dems are trying to ram down the country's throat. Here's the latest Rassmussen poll:

With the Senate poised to vote Tuesday on an $827-billion version of the economic recovery plan, 62% of U.S. voters want the plan to include more tax cuts and less government spending.

Just 14% would like to move in the opposite direction with more government spending and fewer tax cuts, according to a new Rasmussen Reports national telephone survey. Twenty percent (20%) would be happy to pass it pretty much as is, and five percent (5%) are not sure.

Obama headed to Indiana today to try to drum up support for Porkulus ahead of Tuesday's expected Senate vote. This bill is a disaster for the country -- and Obama's prestige. Look for Obama's poll numbers to take a major hit. Fittingly, the photo below shows Obama bumping his head as he boarded Marine One Monday Feb. 9. 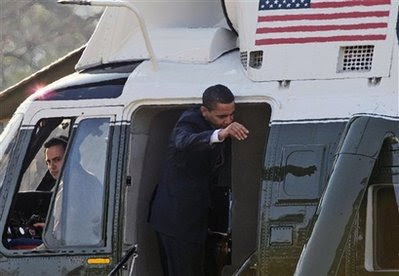 "... if this had happened to Bush the press would go on and on about how stupid or uncoordinated he is. With Obama all they do is question why the helicopter door is too low."

Title the picture:
Alms for the poor-
keep your distance rabble.

I'll add this to my collection. First attempting to enter the oval office through a window (I thought it was a cultural thing), now whacking his head on the chopper. Spiro Agnew watch out.

To see a photo of super-genius Obama trying to enter the White House through a window, click here.

Isn't he supposed to be wearing a pair of Michelle's panty hose pulled down over his head for that operation?

Oh yeah, I forgot, she doesn't wear them.

Anonymous said...
This comment has been removed by a blog administrator.
11:11 AM

I'm sure Letterman, Leno and Jon Stewart will make fun of Obama over this.

Don't forget ‘Air Force 1’ has to take BO and the stimulus bill to (*57*) states! I remember the liberal press thought it was sooooo funny when someone let a door slip and close on President Bush. They tried to make it look like he couldn’t even open a door.

Obama walking into a window? Well, is it adorable, so not to be identified as a blunder. The ‘Change’ I see is the fawning media is worse, if that is even possible? Maybe they can sell a poster of Obama smacking into the glass, and titled ‘The One will not be stopped by transparent barriers.”

The bloggers are not going to do a complete Obama bend-over like the MSM. You Tube will record these blunders for the public. Gone are the days the media could pick and choose the news for everyone. Even with Google trying to direct what results your search recovers, the average ‘Joe” can find another way to the truth.

FYI, I deleted a previous post due to profanity.

(The burst of profanity was from a left-winger who was offended that people are making fun of The Messiah.)

I am not laughing.

Anon 10:16: I'll add this to my collection. First attempting to enter the oval office through a window (I thought it was a cultural thing),

(The burst of profanity was from a left-winger who was offended that people are making fun of The Messiah.)
--------------
Seems a bit insensitive of you to do that. How else are we supposed to tally our number of moonbats driven crazy?

Has MNI put the photo on their web site, or would that get in the way of selling trinkets?

When did it start that you can’t make fun of a president? It has been high sport for eight years. Man, I haven’t even gotten started.

I am glad I don't have cameras following me around 24/7 to catch any mishaps.

However, if this had happened to Bush the press would go on and on about how stupid or uncoordinated he is. With Obama all they do is question why the helicopter door is too low.

Anyone else remember this presidential poll joke?

Vote your current preference:
1. Obama
2. McCain
3. Poke in the eye with a sharp stick

‘The helicopter door is too low’ for this tall, lithe, athletic, Messianic-like ruler. His pectoral muscles rippled as he stepped out the door to wave to his adoring taxpayers. Just when he looked absolutely regal, the poor little royal bumped his tiny head. Oh, no, a ruined photo op. Stop the presses, NOW! Barry says, I can count on that right? Lackey replies: Well, McClatchy for sure!

This kind of information must be part of the wonders of "Change."
@lucianne.com

Punkski would be even better.

Sen. Claire McCaskill (D-Mo.) said yesterday that some of the spending in the $819-billion stimulus passed by the House of Representatives last week represented important federal spending priorities needed to ''make-up for a starvation diet under the Bush Administration.''

I repeat, without the profanity which, unlike all the racial slurs, seems to offend the tender sensibilities of our host:

What a collection of ignorant idiots.

There you go with your imaginary racial slurs, and 3rd grade level insults. Tell me, who do you strive to impress repeating the same childish taunt over and over again. They teach you that in diversity class?

Anonymous 6:13 -- this lefty (5:30) has a breakdown just about every time somebody finds fault in the Messiah. Or makes fun of him.

His usual response is to scream "racist" -- which is about as lame as it gets.

"unlike all the racial slurs"

Everyone knows already that will be the standard remark for every little statement. It is all part of the silencing mechanism of the Obama thuggery administration. Liars, tax cheaters, what a bunch of garbage. Can you say that? Look at it this way, paying those back taxes makes honest citizens of these crooks.

5:30 PM
What was it called when Rev. Wright calls pale people "Whitey" and other unkind names? I'll bet you really got right after him for that, [W]right?

Who knows what this unkind Rev. is calling his new white neighbors?
A Golfing Whitey, I guess.

Is this the same clown that sees everything as a death threat? If so, we need to give him a name if you can't make his posts appear in pink. You know, we could call him something like 63.76.231.147!

You have to have these 'everything is a slur' whackjob types. You can measure how well your posts are doing by their insanity level.

“Is this the same clown that sees everything as a death threat?”

I remember that now. The oldest trick in the book. Plant the post, and then bring it to everyone’s attention. I think that must be part of the Obama playbook. I think it happened on every blog that did not swoon for Obummer. They tried to make a big deal out of it on popular blogs. More sick thuggery.

“What a collection of ignorant idiots.”

He of course means Obama’s cabinet choices. Things are bad for the Dems when they can’t scrape up an honest person. Two crooks slipped in already, and where was the press? The bar is set so low, Barry can look in the prisons next. Give me an honest crook any day.

Obama bumps head? He must be a bumpkin of some sort. Do you think that will be the drumbeat/echo press release until everyone thinks it must be true?

I love this blog!