Stump gets cheated at Kansas.com 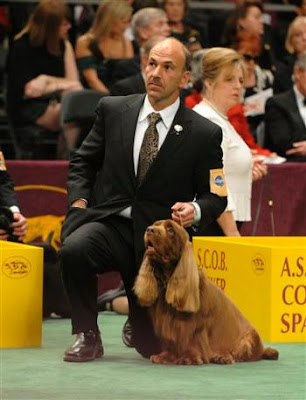 Above is a photo of Scott Sommer and his dog Stump, a 10 year old Sussex spaniel who won Tuesday's competition at the Westminster Kennel Club show. A story about the show was posted on Kansas.com. But the photo accompanying the story shows last year's winner, a beagle named Uno. As of early Wednesday morning, Kansas.com was running the photo of Uno and identifying the dog as Stump. Below is the photo running on Kansas.com. To see a gallery of photos from the competition go here. 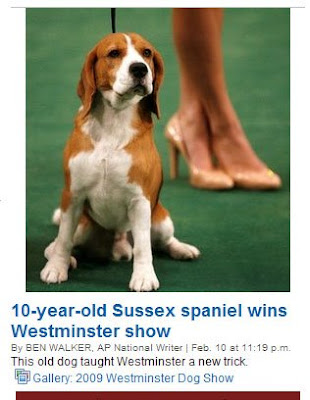 Hat tip via a reader, who pointed out the goof and said this:

"Hardly earth-shaking -- but just one more example of decline."

You would think that the Wichita Beagle for one would get it right, but, of all the transitional declines resulting from a McClatchy take over, theirs was the most dramatic and easily seen. This paper went from a decent local paper, straight to the dogs over a period of a single weekend.

Someone had to work at making that mistake. I think it is more like sabotage, ‘ye reap what ye sow’ type of thinking. Layoff a few editors did ye?

“..one more example of decline."

“Let me count the ways”

Really now, how could that happen? Everyone at least knows what a beagle looks like. This was a joke!

NO ONE cares, that is how a picture switch can happened.

Something like the wrong picture may seem insignificant, but it isn’t. It is a strong indication that the information is faulty from this source. The picture of the winning dog, was a big part of the story, he was ten years old. One has to think, what else is slipshod from this news reporting site, why bother?

Last year’s photo has the ‘legs’ going for it. You have to give someone the credit for reprinting that little detail.

No one ever pays the price for bone head decisions they make. All you have to do is look at the print plant in KC and know that. I wonder how many employees in that "White Elephant" of a print plant has lost their jobs. I understand that they are some of the highest paid at that paper? Usually something that is suppose to be such high tech dosen't require as many people.

Some Beagle readers caught this error also (see comments) although the story was posted late Tuesday and corrected early Wednesday.

This may be an intern-type error, such as linking to last year's content with a similar label, or a careless oversight like those often caught by a copy ed before publication. It's just unfortunate that this one got through.

I keep thinking it was a bit harder to find these types of errors when the Eagle was a Knight Ridder publication.

I wonder if the ex KR execs feel smart for selling when they did. Just a thought.

Making errors? As fewer employees are asked to do more and more, this will only get worse.

I wonder if the ex KR execs feel smart for selling when they did. Just a thought.
-----
Actually, yes we do. Definitive proof of genius is seldom ever confirmed on Wall Street. Claimed often, but not many get to walk away as a confirmed oracle.

You should see my consulting fees.

“I wonder if the ex KR execs feel smart for selling when they did. Just a thought.”

They are laughing all the way to the bank.

There are always questions that the ex-KR employees are not taking the hits like the McClatchy employees are. I would like to see the stats on that. Nothing surprises me that comes from the failed Pruitt administration.

The facts are that the McClatchy debit is KR. McClatchy is going down the tubes because of that. Let the KR papers take a bigger hit. Layoffs and cut the huge salaries at the print plant sounds good to us after all it is YOUR debt KR..