Looming disaster in Miami?... figures published yesterday show circulation at the Miami Herald has fallen by 50,000 in the past year 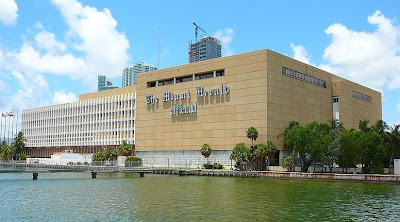 If numbers published yesterday by the Miami Herald are correct, circulation at the Miami Herald has dropped at an unheard-of rate that calls into question how much longer the paper can survive.

The Audit Bureau of Circulations figures I used in November came from Internet articles published by Editor & Publisher, which have unfortunately been 404'd. However, the Herald's Wikipedia page, using the same ABC numbers from last year, also lists the Herald's daily circulation as 240,223.

So here is the shocking reality: a year ago the Herald's daily circulation was over 240,000, and now it is "around 190,000" -- which means, if the figures quoted by Andres Viglucci are correct, the Herald has lost 50,000 subscribers in the past year. Unbelievable!

I don't know how any organization can survive with a trajectory like that.

The next Audit Bureau of Circulation numbers will be published April 27th. Expect major buzz about the Herald's circulation plunge. But remember, you heard it here first.

I had this yesterday genius!

I had this yesterday genius!

hey anonymous -- you may not read my blog but Kevin does! He spends a lot of time on it!

and no one's called me "snarky' for a least two days. You're brilliant!

No one wants a blog war Kevin. I was only responding to the reader who used profanity...anonymously I might add.

As for your comment, I'm afraid I didn't see it.

Have a great day.

Hey Anonymous ‘Bill’, calling out another person that simply admits they want to remain anonymous, while you as ‘Bill’ imports some sort of phony integrity is truly hilarious. Go back under your ‘Bill’ rock, bozo.

well...with the housing industry in turmoil down there who can blame people that don't have a home who want to cut back on all expenses?

What would be more interesting would be how many come back if/when we ever recover (economy wise).

What sort of Nyah, Nyah, Na, Nyah, Nyah, “I had this yesterday genius!” talk from an amateur blogger is this? It looks like the little lady needs to concentrate on finding a better camera, and leave grown-up talk to adults. The sun does that to folks not wearing their tinfoil hats at all times. Poor little liberal comes here to snipe, things must be really bad in Miami.

Spill Bill says, “I had this yesterday genius!”

So the little lady wearing the tinfoil hat had the news first. Man, that is an important snark. Things must really be bad in Miami. Go buy a decent camera, and learn how to use it, as you’re not good at snarking either.

So instead of you children sniping at each other, I have 1 question and I will say that it will appear very ignorant but it is genuine.

Has there been a lot of "white flight" out of Miami due to the economy? If so, would it be correct to say that with such a cultural mix there, the % of non-English as a first language residents has grown due to said "flight". Hence since they refuse to acclimate to the English language, circulation will continue to decrease?

along with that...has circulation increased for the "other version"?

They had a drop in circulation of 20 percent over a year. But I bet over the past year they did a few things to the paper like, not running classified ads a couple of days a week, stop printing special weekly sections, here they are cutting out our Weds. food section, our Saturday Coasting and real estate, Fridays kicks, and there is talk about cutting out the Sunday TV guide. I bet they outsourced all of their customer service to Pakistan or India. They fired half of the people that do the actual work, I bet they also started putting out multiple pieces to the carriers and dealers, getting the papers out there later. Simple business common sense. If you lower the quality of your product, and don't treat your customers right, don't be surprised when they don't by what you are selling.

Seems You don't even understand an ABC report: