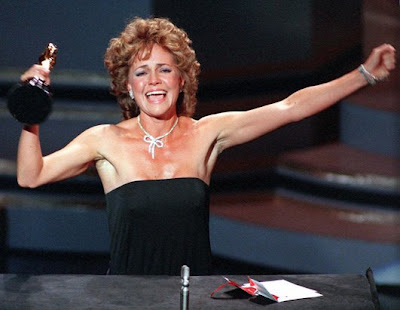 Burdened with self-esteem issues, the Raleigh News & Observer actually took a poll to see if readers like the N&O. Executive editor John Drescher wrote a column in Saturday's paper to trumpet the results: readers really like us!

Rather than acting like Sally Field at the 1985 Oscars, how about telling readers the N&O's paid circulation? Paid readership is a more respectable judge of whether readers like a newspaper. Hopefully we'll find out later this month when the Audit Bureau of Circulation numbers are announced.

The N&O and the Charlotte Observer have one hell of a business model going on here.

You get up on Monday morning knowing at N&O that 69% of voters don't like your product and that 75% are not thrilled by the Charlotte Observer.

Does that tell you brainiatics anything??

"Statewide, 31 percent of voters had a favorable opinion of The N&O"

1. Sally Field, not not Fields. I believe Mr. Drescher is making light of her remarks. It's called humor.

Where was the N&O and the Charlotte Observer in exposing John Edwards having an extramarital affair and fathering a "love-child" while out on the campaign trail?

Why did it take The National Enquirer to expose this story?

How anybody can give these papers a favorable opinion after their despicable treatment of the Duke Men's Lacrosse team is unbelievable.

Any newspaper that has only a 31% approval rating is called an abject failure.

"But this is the Titanic."

"The greatest ship in the world which everyone just loves!"

The earnings report on thursday should be a real, "Hum Dinger" if MNI is pulling this crap.

She was great in "Norma Rae." But that '80s hair is doing nothing for me.

If the poll asked if people "liked" the paper, the poll missed the point, as 2:34 illustrates.

And I think the results are accurate: 31 percent. Which is very, very bad news for the N&O. That's almost as low as Bush's approval ratings. And you see what happened to the Republicans.

Wonder why they didn't ask if people trusted the newspaper. You don't have to like them, that's not part of excellence in journalism, but you must trust them.

Re: Bush's approval ratings.
----
Obama's approval ratings have dipped below those of Preisident Bush for this time in their presidency. "You can't fool all of the people all of the time." Don't expect that news from the corrupt N&O. Poor liberals in their echo chamber only know what the press selects for them. Bloggers will rule the new media.

Funny, all you conservative/racists/losers believed George W. Bush was still affective when he had a similar approval rating.
Shouldn't you people be spending more time getting a job in this horrible economy created by your horrible president?

Dear 9:15. Thank you for watering down the silly allegation of racism once again and making it almost as meaningless as the idiotic manufactured disease, homophobia.

Thanks to folks like you the ability to intimidate people into silence with such nonsense is deteriorating ever more rapidly. What a genius you are. Thank you, thank you, thank you for yet another nail in the coffin of liberalism's totalitarian speech patterns.

Alright! Our homosexual, drive by, person of color pulls in with a scathing rebuttal fit for a scholar. My how educated it sounds.

Gainfully self employed here girley boy. In fact, your pension probably paid for my boat.

Now isn't it time for you to feed the gerbils?

Great, a foul mouthed liberal troll. None to bright mind you, not very "affective" either. Bet that if we push the troll a little we will get nasty sexual innuendo that it thinks passes for persuasion.