Gratuitous slam on Catholics in the KC Star

Cartoonist Lee Judge went out of his way to slam Catholics in a cartoon published in Saturday's KC Star.


With a few strokes of his pen Kansas City Star editorial cartoonist Lee Judge has successfully been able to offend just about all followers of the Catholic faith by saying "many" Catholics support Louisville Coach Rick Pitino, who admitted to having an affair, because they are more interested in a winning basketball team than they are practicing their faith.

Judge, who has been at the paper 28 years and was originally scheduled to be let go during cutbacks last November, seems to have crossed a major line by showing a Catholic priest saying "We have a strong belief in something" and then answering his own statement by saying "winning."

Below is the cartoon. 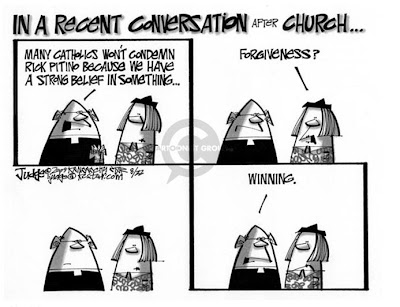 Does this cartoon even make sense to you?... the University of Louisville where Pitino coaches isn't even a Catholic school -- it's a public university.

The Star needs to apologize to Catholics. After they dump Lee Judge.

If Catholics want, which they don't, but if they did want the approval of the main stream media and American liberals, they would have to start stoning rape victims, executing gays, bombing innocent women and children, forcing women into a 2nd class existence and kill anyone who disagrees with them.

This is a prime example of the KC Star has become. Creating hatred and promoting class warfare is what they do. It is what they are all about.

Anyone care to take a bet on weather or not he follows up by expressing the beliefs of the Muslims who hang out at Gates and Sons?

What, are Catholics above reproach? I think not. Can you say Inquisition?

Yet another idiot. What century was the Inquisition? And yet you religious bigots want to trash people living now for what happened way back when?

Judge is a bigot, and The Kansas City Star is a purveyor of religious intolerance. This too is a part of the Brisbane legacy and his alliance with the Meneillyite hate group.

I will give Judge credit however. When he had his blog you could say anything you wanted about him and never once did he ever delete an entry (unlike that pansy Donovan). After he came back they took his blog away.

Judge is not as much of a bigot as Crowson was at The Eagle. They also fired him, but he stayed fired, thankfully.

-his alliance with the Meneillyite hate group-

Why is it unbelievable? Can't you even read cartoons? We need a better class of trolls around here when the ones we have don't even understand pictures.

3:15 PM What do you expect. Our troll can't even recite an original snark. It has to lift them from the KOS Kiddies.

Pot meet kettle. The number one over used retort ever but never fear, it will tell you how much smarter it is than you every time.

The more these fools speak, the more I think they have the right idea with abortion. 50 million dead leftists is nothing to sneeze at.

John, can you provide even one example of "hate" by the Mainstream Coalition -- except that they opposed far-right candidates and expressed opinions opposite yours?

The "pot meet kettle" line is inherently racist because it refers to the blackness of both the pot and the kettle.

They definitely need to attend some cultural awareness and conscience raising training. The need some serious postmodern deconstruction of their prejudices and biases.

I denounce myself for even recognizing the underlying racism and possible sexism in this expression.

THEY ARE LIBS, WHAT DO YOU EXPECT LOGIC, CLASS? OF COURSE NOT

While former opera singer Joanna Simon was Walter Cronkite's constant companion in the last four years of his life, summering in Martha's Vineyard and yachting off the East Coast with the legendary TV anchor, he didn't leave her a cent when he died last month.

Judge should re-scribble his cartoon using the Religion of Peace instead. He could draw an imam talking to a gal wearing a burka with eye slits, and use the same words. He might even have the success of the Danish cartoon. No doubt, in a short amount of time, his retirement would be involuntary, and final. There would be outrage from everywhere.

3:36 The Meneillyites (they have no legal right to use the MC name anymore) arose specifically to oppose conservative people of faith and drive them from the marketplace of ideas. Hence their opposition was based on religious affiliation and yes, I have talked to multiple witnesses attending their hatefests and specific denominations were mentioned. I've also listened to tapes of their meetings in which religious bigotry was spewed by Meneilly and his pals.

The hypocrisy of Meneilly's group is that he stood in his church and announced the formation of his hate group and spewed his venom from his pulpit. It's OK if you're a "religious" liberal to support candidates (and they do through their PAC), but not if your faith calls you to support conservative ideals.

Meneilly was also not the most honest of folks. Early on the Meneillyites tried to hold themselves out as "moderate" Republicans, a claim that rapidly became laughable. What's pathetic is that you chose to try and hold them out as just another left wing group opposing conservatives, ignoring the religious component that has permeated their hatemongering since day one. Just another left wing liar trying to create a revisionist history.

Which paper is more hated by the public and its employees - the KC Star or the Sac Bee? No other McClatchy papers generate that type of loathing. Gary needs to take a hard look at why these two are not respected by the public. Good business is a good public image.

It is not even funny. I am not Catholic, but it really just seems lame. I read that cartoon and just sort of wondered why it was even written in the first place.