Barnhart finds the "raising fears" email he said he had deleted

Amazing! Aaron Barnhart said yesterday that he found the disputed "raising fears" email he received from FOX PR after checking the spam folder in on his gmail account.

... it suddenly occurred to me: What if Fox News sent the same email to my tvbarn address? And there it was, buried in my daily mountain of 200 news alerts and PR. Gmail puts them in a separate folder that I'd never thought to check.

He retrieved the email and posted it on his blog. Here is the email. 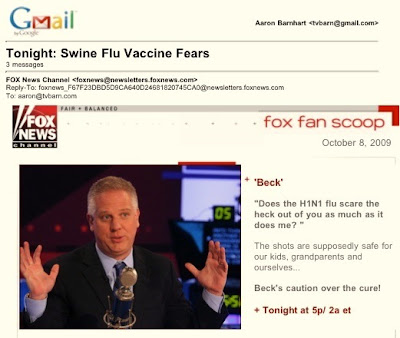 But the real question to me: was Barnhart honest about his claim that FOX "emailed to let me know Glenn Beck will be raising fears tonight..."?

Barnhart boasted Friday, "... there’s no disputing that the tweet was a spot-on paraphrase."

Really, Aaron? I'd put the tweet in the smart-aleck category, not the honest reporting category.

If Barnhart had stuck to tweeting the the facts -- instead of tweeting misleading snark -- he wouldn't have found himself quoted as a source by Keith Olberman on one of his anti-Glenn Beck tirades. To be followed by a public response from FOX PR calling Barnhart's honesty into question.

1:29... do you have something to say or do you just enjoy assholeing around on the internet?

What, he issues what amounts to a retraction where everyone can see it (not like the jerks at The Star) and you bitch about red meat. Hell, you'd probably complain if we hung you with a new rope. What are you, on the rag, or something?

Let me repeat what I said earlier. I will always wonder how much better our community would be with an honest newspaper instead of this filthy handmaiden to corruption.

As for Barnhart. It would seem he did indeed come up with the email. Good for him. Does that change my opinion of him, or The Star? No.

The Star has a reputation for deceitfulness and dishonesty. Were it otherwise, Barnhart would have had the benefit of the doubt to begin with. I've also got a few emails of correspondence from Mr. Barnhart that show him for the egotistical Stalinist that he is.

So, did he lie on this occasion? Perhaps not, but its like discovering that Ted Bundy didn't kill his alleged 37th victim, it doesn't make up for everything else he and The Star does to denigrate and embarrass our community.

Wow, this is what fact checking looks like at the Star. How embarrassing for them

Barnhart likely does have a source at Fox that doesn't like Glen Beck none too much and he probably did an unofficial smart remark. But Barnhart has really no option but to protect that source at the expense of his own job. The fact that it's in a tweet makes it awkward, but he's still obliged nonetheless.

Speculation is not probability.
Speculating that Alan hates Beck and sought to find a way to attack him, facts be damned, is the obvious speculation and is also more "probable" too.

Aaron's pretty funny in the way he handled it. I fail to see why it's even important what some commentator is saying on TV, though. It's not news. It's covering some other guy commenting on the news. To bad TV was even invented! We'd have had stronger papers now.