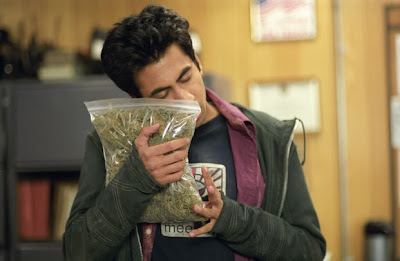 Kalpen Modi, the star of the Harold and Kumar Go To movies and the TV series House, made a big splash when he put aside his Hollywood career to take a White House position as “director of public engagement,” which everyone assumed would be more or less a liaison to Hollywood as an adjunct social secretary.

Unfortunately for Modi, he apparently didn’t stick to those duties. According to new documents released as part of a FOIA request, Modi helped plan the notorious NEA call conducted by Yosi Sergant that attempted to link NEA grants with support for the Obama agenda, another direct link to the White House in the scandal:

Former actor and present White House associate director of public engagement Kalpen Modi was directly involved in planning the controversial conference call hosted by a National Endowment for the Arts (NEA) flack to encourage tax-supported artists to create propaganda for President Obama, according to emails obtained by Judicial Watch via a Freedom of Information Act (FOIA) request.

Buffy and the Peeps PATTERICO

(The Corporation for National and Community Service, which runs the AmeriCorps program, also was represented during the call.)”

Here are excerpts from 4 emails listed at the JW website:

“[The call is] organized by me…I’d ask you to come on and give the exact spiel you gave on Saturday. Walk them through the WH Arts Policy. They won’t know it. Then I will take them into United We Serve and the NEA.”

“Oy. This would be awesome to be a part of. Let me know if you think it’s going long, or maybe I can get someone from here to do it if I can’t because of the Social Security mtg.”

“Let me see if we can move Social Sec by a few mins. Agreed, it would be great to be on the call and helpful for us also.”

“We have an important call at 2pm for UWS (United We Serve) and the Arts with my peeps. Indie producers around the country. Kal can’t join the call. Any chance you can hop on for 5 minutes and intro with Nellie and I?”

More at the Judicial Watch link.

You don’t need FOIA requests to learn the connection between Obama and the present NEA chief. There is a trail of slobber from the Oval Office to his office.

The trouble with his whole mess is that the Obama liberals will not see anything wrong with it. They are too blinded by the reflection off the unicorns horn to realize the danger intrinsic in more politicizing the already political NEA.

Imagine the collective squeal if Bush had tried to do anything like this.

These are sad, funny glimpses into the secret dialogs of very insecure and unimportant people who are heavily invested in the notion that they’ve become important “players” in the Age of Obama.

They love to hear their own voices announcing their titles and areas of responsibility, and it’s fair to presume that there were many, if derivative, thrills of excitement running up many legs of the participants.

As for the NEA and the current White House? Merely the tip of what I imagine is (or will be–certainly once the history of this time in US history is fully examined) a huge iceberg of corruption, of both “goddamn America” ideology mixed together with the mentality of used-car salesmen and ambulance-chasing lawyers.