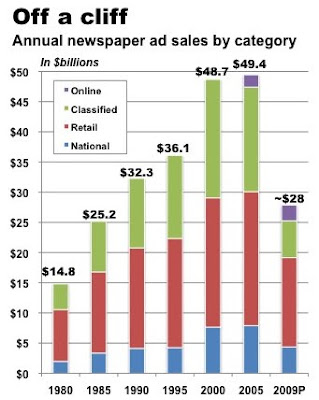 Alan Mutter offers a dose of reality to the glib presentations by Gary Pruitt -- and the New York Times -- at Tuesday's USB conference. Instead of listening to the happy talk by newspaper front men, look at what is happening with actual advertising revenue.

Newspapers are on track this year to produce their lowest advertising sales since 1986, representing a 43% drop from their all-time peak of $49.4 billion in 2005.
.
Based on the historic sales slide in the first nine months of the year, newspapers are likely to generate no more than $28 billion in advertising revenues in 2009, thus shedding more than $21 billion in sales since 2005.
.
In other words, newspapers appear to have gotten mighty close to losing almost half of their revenue base in a mere four years – a decline that began well before the economy began unraveling.
.
Advertising sales matter because they traditionally have generated 80% of the revenues at most newspapers, with circulation fees providing the balance. The profound contraction of the advertising market has caused some publishers to begin ratcheting up subscription and single-copy prices, but the industry at the moment will live, or not, by advertising.

How will Melanie Sill, with her “It’s just that darn economy” meme, interpret the graph?

How does this decline compare with other media and businesses, and markets such as automotive and real estate..

A friend of mine owns a company which was the subject of a story in the local newspaper. A group of friends asked him about the story. He said it was neither positive nor negative but that the reporter managed to get most of it wrong anyway. The other execs reacted with " What do you expect?"

Guess how many of these execs would think that advertising in a newspaper would be a good idea?

This excludes ad revenue from employment which has declined at a much steeper rate.

Maybe like E&P, McClatchy will also go Chapter 11 in the dead of the night.