Miami Herald executive editor: "I don't think there will be any more layoffs" 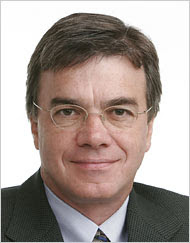 Talk about a state of denial.  Miami Herald Executive Editor Anders Gyllenhaal said in a recent interview he doesn't believe there will be any more layoffs at the Herald.

Last week, Herald Executive Editor Anders Gyllenhaal likened what's happening in the newspaper industry to being hit by a hurricane. But he told me he doesn't believe there will be any more job losses at his newspaper.
"I just don't see that happening," said Gyllenhaal, who was a reporter for the newspaper back in its early '80s heyday. "It's been a difficult period, but everybody in the newsroom knows what we need to do. Whether it's a literal hurricane or a figurative one, which is what we're going through in a way, this is a newsroom that is taking it on and handling it."


The Herald cut 250 positions in June, and another 119 positions in September. The revenue slide has not stabilized since the last round of layoffs; in fact it has gotten worse. Which makes me wonder if Gyllenhaal is losing touch with reality. Photo credit: Tom Wallace/Minneapolis Star Tribune.
on Friday, October 31, 2008

Gyllenhaal must also think that the revenue and readership drop-off is only due to the housing bust.

Because, you know.. The Miami Herald is the only "real" source of information and marketing for region -- and once the economy bounces back -- retailers , auto dealers, and developers will beg to pay the Herald's rates.

Good point. As retailers get experiece with internet marketing, it will be interesting to see how many of them go back to newsprint ads once the economy picks up.

He's going to eat that no more layoffs prediction. October ad revenues were truly dismal, continuing the abrupt slide that started in September, and Christmas is looking very, very bad for newspapers. So where is the revenue going to come from to make the payroll. The Miami Herald is in really deep trouble, and looking more like the old Miami News in its dying days. A prime example of MNI mismanagement. There is no excuse for this paper not being a L.A. Times leader in the United States, not the poorly designed, backwoods and parochial product that it is now.