A bailout for newspapers? 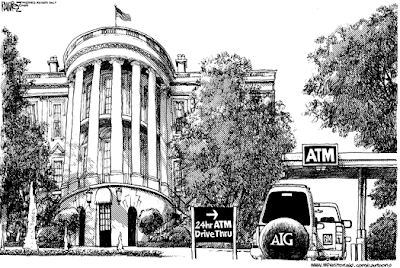 Since the feds are offering bailouts to just about everybody who wants help -- AIG, Bear Stearns, home buyers who overextended themselves with mortgages they couldn't repay, maybe the auto industry -- why not newspapers? Joan Vennochio at the Boston Globe says that's a bad idea:

The problem with Detroit and Newspapers is that they are products that people find unnecessary. Hey, McClatchy laid me off...I can't afford a subscription so I read it on line. I can't afford a new car so I buy a used one. There are other ways to cut back. Why pay high grocery priced when I can go to the Grocery Outlet and other low cost stored. I think the higher priced grocery stored are hurting too...like Safeway, Raley's Nob Hill in our area.
McClatchy is on line...it's free...they even sent me a "we want you back" letter...Cheap rates...even cheaper than the employee discount I used to get! I'd rather put a gallon or two of gas in my car or a gallon of milk on the table!

A government bailout would taint even further the shrinking credibility of newspapers. We're "supposed" to be government watchdogs, after all.

No wonder Anonymous was laid off. He substitutes "d" for "s" too often in his writings.