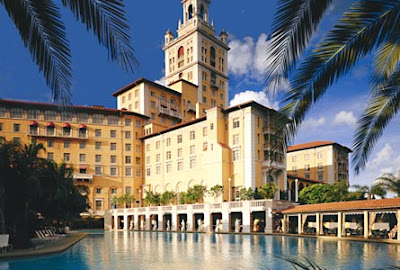 Random Pixels has word of a brainstorming session by executives and top editors at the Miami Herald held at a posh Coral Gables hotel. Reportedly, one of the exercises included a small group activity where participants picked popular songs and rewrote the words to illustrate the Herald's predicament and possible solutions.

Some strange news filtering out from the Herald:

Sources tell me that a select group of Miami Herald executives were involved in some sort of a one-day workshop the week before last (apparently after the election) at the posh Biltmore Hotel in Coral Gables.

The secret, invitation-only meeting was attended by Herald department heads and top editors.

According to a source the purpose of the meeting was to get key decision-makers at the troubled paper together in one place to plan strategies and come up with innovative ideas on which direction to take the paper.

Details are sketchy but the source reveals that at some point all those attending broke up into small groups and participated in various exercises designed to motivate them.

One of the exercises consisted of group members picking a popular song and rewriting the words to illustrate the Herald's predicament and possible solutions. One group picked the song "I Will Survive," rewrote the words and then sang it. Said one participant: "It was embarrassing."

Word of the summit is slowly making its way through the newsroom which has been decimated by staff cuts. As the Herald continues to experience unprecedented declines in revenue and circulation, some staffers are incredulous that the paper is wasting time and money on "foolishness" instead of coming up with concrete ideas regarding the paper's survival.

I wonder if anybody picked this song.
.
Previous:
Miami Herald executive editor: "I don't think there will be any more layoffs"
.
on Monday, November 17, 2008

Did any of the execs make use of the expensive ladies who nightly inhabit the Biltmore's bar?

Is there a song "Idiots Sing"?

Now there's an idea. Gather together all the people who were at the helm when disaster struck, hole them up in insular accommodations, and engage them in dubious creative exercises to try to wring a new idea out of them. I'm sure it was a productive session, right?

If these executives wished to demonstrate real vision and commitment to change, they would have invited outside talent to speak to them, with fresh ideas and new perspective. I would have invited execs from Apple and Google, among others.

Huddling together with the same old ideas and perspectives is hardly a petri dish for innovation and groundbreaking change.

This confab sounds like it was a symptom of the underlying problem, not a catalyst for change.

They could always try committing some journalism for a change and see if that works better than left wing partisan cheer leading.

The Herald just doesn't get it. As long as the same tired people are in charge, nothing is going to change....except more readers will flee.