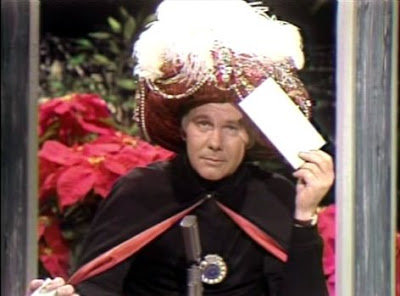 A commenter's post today reminded me of the day Howard Weaver channelled Carnac the Magnificent and made a psychic prediction about the future of McClatchy.
.
On June 16, sometimes called Bloody Monday, McClatchy announced it was slashing 1.400 jobs. A reader left the following post on Howard Weaver's blog that day:

10% layoff 3 days after announcing the creation of a new VP position? I wonder how many positions you have to cut to offset a VP's salary/bonus/options...

"Steve Bernard, the new VP/Advertising, is coming on board to increase revenues. He will pay for his salary by hundreds, perhaps thousands of times. You ought to be celebrating that announcement."

Uhm, that bold prediction didn't exactly come true, did it. Since Weaver made that prediction, McClatchy laid off hundreds more in late summer and early fall. And we recently learned McClatchy's ad revenue for October was down 20% from last years level.
.
Hat tip: Archer05
.
.
on Thursday, December 04, 2008

On his Etaoin Shrdlu blog, Howard was catching a lot of static about his expensive hotel stay, and other bad McClatchy business decisions. He started another blog, ‘McClatchy Next’ - “an online repository for ideas…”
for [registered users only.] Was this to upgrade the discussion, or cut down the questioning of poor management?