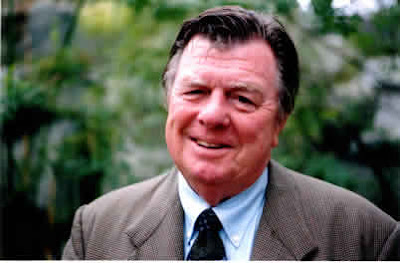 Joe Galloway, McClatchy's most gloomy and embittered columnist, called President Bush a "felon" in a vitriolic column in which he also called for prosecution of the Bush administration for possible war crimes.

What signal does it send to Mr. Bush's gang of unindicted co-conspirators, who've unwrapped a Pandora’s boxful of other offenses — from perverting the administration of justice, to illegally eavesdropping on the phone conversations and e-mails of ordinary Americans, to salting the stream of intelligence with bogus material, to inviting their cronies to loot the Treasury with no-bid military contracts, to lying under oath to congressional oversight committees, to applying political litmus tests to the hiring of civil service employees to the wholesale destruction of White House e-mails and records? Etcetera. Etcetera.

This nation was founded on the principle of equal justice under the law. No one — no one — ought to be able to skate or hold a get-out-of-jail-free card by virtue of having been the most powerful felon in the land, or of working for him.

Galloway's phrase "the most powerful felon in the land" is the way Galloway refers to President Bush. Nice.
.
Galloway, by the way, predicted Barack Obama would win the November election by 15 to 20 points.
.
Related:

Enjoy... this is exactly the reason people cancel subscriptions. Not because they don't like Gary Pruitt. Most don't have any idea who Gary Pruitt is. But moonbats like this are the primary reason the liberal media is getting a chance to see those chickens coming home to roost.

Anonymous 8:22 -- agreed, McClatchy doesn't seem to care if they offend nearly half their subscribers.

I dropped my subscription six months ago for this very reason. A day without the Sacramento Bee is money in my pocket. Why pay for something and get upset, when I can get upset reading it for free on line. McClatchy has been commiting slow sucide for years. Any company that insists in insulting their buyers won't be around for long, especially in a slow economy.

Give old Joe a break. He's been inebriated ever since Vietnam, and no longer has a clue what he is saying. It is guys like that that do the serious, long term damage to leftists. We need moonbats like Joe and the gang. Without them, liberals might suddenly sound credible to normal people.

...And we have long memories. Je me souviens. I doubt if Joe can find the car he parked this morning.