Meryl Yourish noted Tuesday that McClatchy's Dion Nissenbaum repeated a claim made by the Times of London that Israeli forces were using white phosphorus shells on Palestinians. If Nissenbaum had done some research he would have discovered the claim is Hamas propaganda.

"But then Sheera uncovered photographic evidence showing an Israeli soldier along the Gaza border who is looking at a U.S.-made white phosphorus shell.

"Despite the clear markings that The Times said ID the shell as containing white phosphorus, the Israeli military argued that Israel had changed the contents and that it was an "empty shell."

The photo is below. 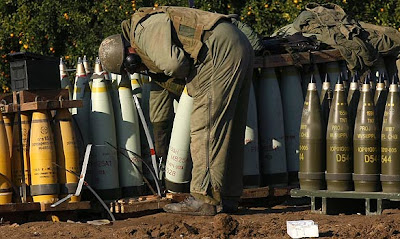 But the photo is not the evidence Nissenbaum claims. Over at Confederate Yankee, Bob Owens actually did some research; it turns out the claim is leftist propaganda. Owens confirms Israeli forces are using 155mm M825A1 white phosphorus shells in Gaza. (You can see them clearly marked in the photo.) But the white phosphorus shells they are using in Gaza are not incendiaries, and they are not being used in any way that can possibly be misconstrued as illegal.

Bob Owens links to Global Security piece that explains the phosphorus being used in Gaza is nothing but a smoke round.

The M825 is a 155mm Smoke projectile used to provide screening or marking smoke. It is a separate loading munition using a hollow forged steel shell. The shape is ogival with a boat tail for aerodynamic efficiency and a welded steel baseplate. Close to the base is a gilding metal drive band protected by a grommet until just before loading.

The M825 White Phosphorus (Felt-Wedge) is a 155mm base ejection projectile designed to produce a smoke screen on the ground for a duration of 5 to 15 minutes. It consists of two major components, the projectile carrier, and the payload. The projectile carrier delivers the payload to the target. The payload consists of 116 WP-saturated felt wedges. After ejection, the WP felt wedges fall to ground in a elliptical pattern. Each wedge will then becomes a source of smoke. The projectile is ballistically similar to the M483A1 DPICM family of projectiles.
Smoke ammunition is a limited asset. Since ammunition requirements vary with each mission, observers should know the amount and types of smoke ammunition available and how many minutes of coverage it can provide. Extensive, planned smoke employment should be coordinated early with firing units to allow for redistribution or requisition of ammunition.

So the shells are being used in this case to put smoke on the ground to conceal IDF troops, and at other times, to light up the sky to locate Hamas terrorists.  This is a legal use.  There is no targeting of civilians. More on the bogus white phosphorus libel here.
.
Follow McClatchy Watch on Twitter
.
.
on Wednesday, January 14, 2009

Do you believe in miracles?

Is this one of those ‘Gotcha’ moments the liberal media loves?

And this slouch is the same Dion Nissenbaum that trashed Joe the Plumber?

Didn't you miss a paragraph?

"The Israeli military categorically rejected the newspaper's finding that its forces were using white phosphorus, even though it is legal to use as a smokescreen or for illumination, which is what Israel appears to be trying to do."

So, the military said they weren't using it, even though it is legal. Then, they were found to be using it (it looks like in a legal way.)

I think it's pretty much a non-story - just curious why the Israelis would bother to say they weren't using it. But, I imagine they didn't want people misunderstanding the usage.

The linked article by Meryl Yourish is very interesting. Now that I know how the McClatchy boys reported the Iraq war, I absolutely believe bias is evident in Dion Nissenbaum’s report.

It seems to me that Israel is faulted for collateral civilian deaths, but Hamas is not faulted for placing the civilians in harms way as human shields.

One thing with bloggers reporting and questioning, we may actually find out what is happening without someone’s bias writing the news as they want us to know it.

Archer05 -- Dion Nissenbaum must be the worst reporter in the middle east.

He whines incessantly about Israel barring reporters from Gaza, he can't stop complaining about Joe the Plumber, and he regurgitates Hamas propaganda.

And they still wonder about their stock price?

Here is Joe the Plumber reporting from Israel:
http://tinyurl.com/9br7vj

Real reporters(?)sneer at Joe, but REAL people read his reports with appreciation. That is pissing them off big time.

Joe is not a classically trained professional journalist with the highest ethical standards. Instead he tells the truth.

Nor does Joe reap the rewards of nepotism and phony syndication numbers!

You and your fellow right wing nuts betray your inhumanity and your willingness to rationalize anything for the sake of awful ideology.

Listen. Look. The truth is the IDF used Phosphorus shells to terrorize innocents. That is a war crime!

It is a discredit to the rest of your stupid, insubstantial blog.