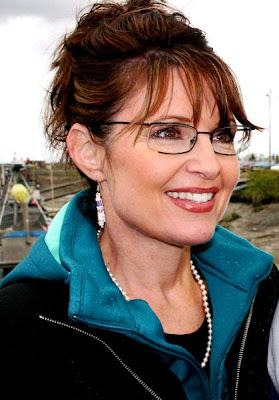 The latest Palin emails released by the Anchorage Daily News show Sarah Palin expressing deep sympathy to the editor of the Anchorage Daily News for the cutbacks it has had to endure, as well as the massive problems facing its parent company, McClatchy.
The release of the emails is the latest round in a brouhaha which started last week after Sarah Palin's office slammed the Anchorage Daily News for assigning a reporter to investigate whether Sarah Palin is actually the mother of Trig. After the smack down, nutty ADN editor Pat Dougherty admitted he assigned a reporter to do the investigation, but claimed he never actually believed the loopy rumor. To divert attention from the nonsense at his paper, Doughtery has published several of the emails from Palin over the past few days.

In the latest emails, released Tuesday, Palin shows she is aware of the financial distress at the Anchorage Daily News and its parent company, McClatchy.

"With such limited amounts of hard news in your recently streamlined paper, I believe it's more important than ever to make sure what you print is truthful and accurate."

"I do hope for nothing but the best for our local newspaper in these trying economic times that have hit your parent company."

Heh. I call that a not-so-subtle Palin smackdown. You could even call it "Truth to Power."
.
UPDATE: 6:15 -- typos corrected, thanks to readers who pointed them out.
.
Related:
.
Follow McClatchy Watch on Twitter
.
.
on Wednesday, January 14, 2009

Anyone see this story on content sharing with the Fort Worth and Dallas papers:

Wonder what happens to the beat writers? Another bad move by MCT.

LOOK OUT, you spelled Palin wrong...some weasel in a glass media house is gonna try to rip you a new one 'cause of a typo... we're only human!
Otherwise keep up the great work!

Does Sarah speak for me? YOU BETCHA! (Wink, Wink)

The rumor mongering editor Pat Dougherty, didn’t follow up on at this BIG rumor. A poster in Anchorage wrote that it was common knowledge that the unions were manipulated by Moveon.org to use mass e-mailing to keep damaging gossip in front of the voters via continuing media coverage. There was no proof that the e-mailers were even from Alaska, and yet the faux editor used the one line messages as proof the gossip would not die. Melanie Sill at the Sacbee reported the fake gossip stories as breathless breaking news.

Fake news, generated from fake e-mails, originating in rumor and gossip, by manipulated union members. That sounds like a tombstone epitaph to me.
RIP McClatchy

Gov. Sarah is the whole package, and one pretty lady.

80% of Alaskans approve of Gov. Palin, so why do 20% of the malcontents rule the media? A dishonest and liberal editor or two? McClatchy has disgraced itself again. Goodbye and good riddance.

Anon. 6:32
Give it a rest, will ya? Most bloggers, including esteemed college professors use their readers as citizen editors to correct typos, or submit rebuttals. That is the healthy aspect of blogging. Comparing a single blogger‘s post, to a newspaper’s article, with all the hands a newspaper item passes through, is childish.

Good luck in your new chosen profession. BTW: I have not noticed many lines of work that reward snarkism

SHE IS THE NUT. All she has to do is release Trig's birth certificate and she refuses to do that. That is why so many people think still that she is lying and that she is not Trig's birth mother.

How the birth certificate Palin and stop all this nonsense in the press! You are asking for more coverage on this otherwise.

PS Hey anonymous, you have OLD OLD OLD statistics! 80% of Alaskans do not approve of Palin. Her number went down significantly after the election and in a recent poll against Lisa Murkowski it was Lisa 62 % / Palin 32%

She is losing popularity in Alaska and more and more each day when she spends more time talking about the press and media and poor poor me, and doesn't do her job! She needs to step up to the plate

Just as soon as "The one" releases his

What poll was that? One from the loony editor of the ADN? Why would anyone believe anything from the paper of gossip and rumor mongering? What was the question that two conservative women were pitted against each other? Just because you are drinking Kool-aid wearing a tinfoil hat, don’t assume everyone is without an intelligent thought process.

"January 14, 2009 11:58 AM"
Aw, another Troofer. Did unicorns wake you up this morning? Is the sky purple where you are? Did you notice that Mr. Dougherty called you delusional? Go back to your hole, and let the sane people discuss things.

Truth lover said "in a recent poll against Lisa Murkowski it was Lisa 62 % / Palin 32%" That poll, funded and conducted by Murkowski sympathisers/Palin detracters, actually referred to opinions re the Senate seat Murkowski holds. It was NOT a general popularity poll. Check your facts on ADN next time.The results were the opposite of a previous KOS poll and exit polls at the November election so the results were dodgy to say the least

Sorry archer, I was just pointing out that the weasels at McClatchy are ruthless as far as anyone criticizing them yet they can't take the heat. I dislike McClatchy because of what they have done and are doing in the name of unbiased journalism, and what they have done to the thousands of (ex) employees. My apologies to M.W. and you, I was being sarcastic with my intentions pointed at the McClatchy worker Bees and their feeble attempts at damage control.
I had a long day at college pursuing a new career! (Really!)