It's not the crime, it's the cover-up.

That Watergate-era truism comes to mind in a what looks like a little "cover-up" by Melanie Sill -- or one of Sill's surrogates.

Here's what happened. Blogger John in Carolina noticed a mistake in Sill's Sunday column. Reviewing some Bee stories from 1933, Sill had said FDR was "in London working to stabilize the currency."

But FDR was not in London in 1933, and John in Carolina pointed that out in a comment posted on the Bee's site.

His comment stayed on the Bee's site several hours before it mysteriously disappeared. (To see John's full comment, go to John's site here.)

Below is a scan of Sill's Sunday column with the mistake about FDR in London. 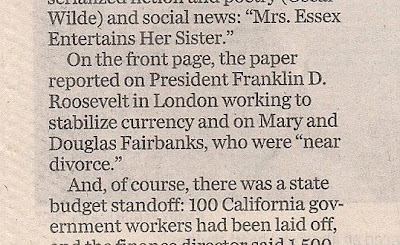 This paragraph was changed in the online version to read:

On the front page, the paper reported on President Franklin D. Roosevelt's views on a London conference to stabilize currency and on Mary and Douglas Fairbanks, who were "near divorce."

And this sentence was added just above the column: "The online version of this column differs slightly from the print version." You can read Sill's column online here.

(Nice -- but tell readers what you changed.)

As I type this, no correction has been posted on the Bee's correction page (here).

As mistakes go, this is tiny. Whether FDR was in London in 1933 doesn't change the meaning of Sill's column at all.

But the little mistake is magnified by deleting John in Carolina's comment, then not posting a correction.

How about a little transparency, Melanie?

All of this explains why I'm a former reader of the Sac Bee. The column was a puff piece highlighting the early socialist FDR, who just happens to be the Big O's mentor. It was done on Independence Day. Melanie could have spotlighted the Declaration of Independence, but she choose not to. Her usual columns try to explain how the Bee is "fair" in its coverage, and why it's good for the reader when the Bee shrinks in size.

(Nice -- but tell readers what you changed.)

When the KC Star was practicing the posting of blatantly falsified articles every single day during the elections, Derrick Donovan actually had an excuse as to why they didn't site the mistakes that they make and just change them on the fly.

He explained that if they told the truth and were honest about what they had changed, "It would confuse the reader even more." His logic if one would call it that was that it was better just to ignore the, "mistake" and simply correct it.

If it were not so pathetic it would have been funny.

Derrick Donovan is so pathetic, that I wonder how any self-respecting person could write the lame excuses he does? Unless he is incredibly stupid, he has to know how ridiculous his ramblings sound. Why have an ombudsman clown?

I cannot imagine how Melanie Sill still has a job with any newspaper. She was a disgrace at the N & O during the Duke scandal, and she was hurried out of NC rather than the paper admit she was a racist. They seem to think removing the racist, removed the questions, but it did not. Now that we have a better look at the McClatchy players, it is easy to see why they are failing. Pruitt, Weaver, Sill, Zieman, on and on. Good grief, a parade of losers, and none of these so-called newspaper people will find a place in the new media, IMO. There is some consolation in that of course.

I notice that further down the reprint it states..."And of course there was a state budget stand off:100 California government workers had been laid off...

(If the state govt. had been on top of their game, they could have charged a special fee or tax to everyone coming into the state to attend the Jackson memorial...bet that would have pulled us out of the hole!)

Melanie Sill is so awful at her job, that it is difficult to understand how she got her job in the first place, or keeps it. It is sometimes said that women of a certain age cannot be fired, or demoted, because a lawsuit will follow. I am beginning to believe there is some truth to that, there is no other rational reason to retain a high paid employee that incurs bad community relations wherever she goes.
MOO Stan

If you need a Sunday morning laugh, just read the enlightning column of Melanie Silly. It is amazing how a hollow person like her can land at a McClatchey position like hers.

Loonessee has no limits and it shows here.

...It is amazing how a hollow person like her can land at a McClatchey position like hers.

Hey,I know how deceitful Sill is. I once sent her a true story involving me and an African American. The story can be read on my site www.raleysexposed.com/email_2_from_melanie_sill
She responded to my email and didn't send a CC copy to the Bee's Linda Brooks-but every other email Sill sent to me was CC to Brooks. There was a reason she didn't CC my story about an African American to Brooks. Sill is just a phony inept journalist...