Give it up for Lieutenant Ben Vargas 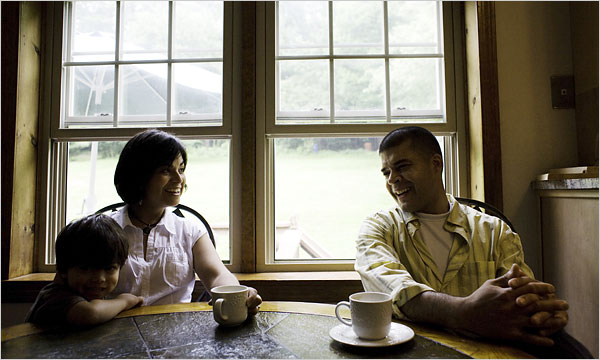 
The New York Times delves into the story of 40-year-old Lieutenant Ben Vargas, the lone Hispanic firefighter plaintiff in Ricci vs DeStefano, and why he did what he did:

“Gesturing toward his three young sons, Lieutenant Vargas explained why he had no regrets. “I want them to have a fair shake, to get a job on their merits and not because they’re Hispanic or they fill a quota,” he said. “What a lousy way to live.”

Vargas is of Puerto Rican heritage like Sonia Sotomayor. His parents are from Puerto Rico and his sister lives there now. Here’s how Vargas explains the difference between Sotomayor’s perspective and his:

“She’s from Puerto Rico, and I’m from Puerto Rico,” he said. “She obviously feels differently than I do.”
***
“I consider myself an American — I was born and raised here,” he said in an interview on the porch of his home in the wooded suburb of Wallingford. “I love my people. I love my culture. I love our rice and beans, our salsa music, our language — everything my parents raised us with. But I am so grateful for the opportunity only the United States can give.”

It's too bad Vargas wasn't nominated for the Supreme Court instead of racialist Judge Sotomayor.

...The left fought long and hard against racism and then, in the 60's, turned on a dime and fought long and hard to base employment and contracts and political office on RACE, SEX and NATIONAL ORIGIN. Lefties long ago sold out their soul for power. Now we see the results of this debasement as the public voice of those racist thugs , newspapers, are crushed and broken. It's about time.

Interesting that only a blogger would tell this story. Our local newspapers are just silent except for the approved lines of thinking.

So if I read this correctly this article was from the NY Times. If I recall, the great majority of you lambast this publiction for being so liberal.

So my question to 7:05am is simple. Do you want to take back your comment since it is obvious that you only read what you wanted to read and forgot to mention where the article originated from?

I'm thinking not but hey, maybe you'll surprise us.

What race are Hispanics?

Is a Caucasian born and living in Barcelona Hispanic? Was the former president of Peru Alberto Fujimori Hispanic? Vicente Fox looked a lot like a 6'4" Irishman.

Is someone from Brazil who speaks Portuguese Hispanic? Do people in Spain think of themselves as a separate race from other western Europeans? What race is a black person from Cuba or one whose family has lived in Mexico for 4 generations?

Why do so many treat Hispanic as if it is a racial classification? If my Great Grandparents came from England but I was raised in a community that was predominantly and culturally Hispanic such as Brownsville, Texas, am I Hispanic? How about if my Great Grandparents immigrated to Mexico, were named Gusman, and I was born and raised in Mexico City?

Often you see reports, such as school scores on tests, that compare Black, White and Hispanic. What race were the Hispanics that took the test and why compare a race (Black) another race (White) and an ethnicity (Hispanic)?

What race are Hispanics?

****If I recall, the great majority of you lambast this publiction for being so liberal.****

The NY Times is Leftist drivel or do you not remember it forbidding John McCain to write an editorial and only allowing Obama?

Oh, and I doubt the NY Slimes would write such an article about a White Caucasian, but rather chose a Latino,

As always, someone is redirecting off the point. The 8:36 post was to show once again the hypocracy of the right. The original article was from the NYT. Get off your soapbox already. Your comments are nowhere near the ballpark of what the post was about.

Where is the similar article from the NY Slimes about a Caucasian Marine?

I guess it doesn't fit their Far Left agenda to smash white males.

Actually, the original article didn't originate with the NY Times. The first paper to go with the story of Vargas' assault was the New Haven Register in 2004 here.

The Hispanic Conservative, and my research was actually better since I used the actual police report and talked with Ben Vargas personally.