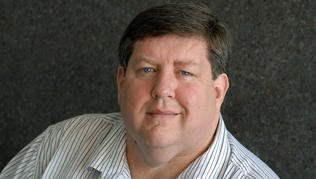 Obama means the road to the promised land is a public highway.

Obama means that today a teacher in a crumbling classroom of free-lunch kids can tell them they can be anything, and today maybe they will believe.

Obama means there is no more waiting for the first.

Obama means that people can look beyond a name.

Obama means that words still matter, that a speech can be both politics and poetry, that ideas carried inside the beauty of language can still inspire.

Obama means that skinny guys do not always get picked last.

Obama means that we never like one bunch to hold power too long.

Obama means that John McCain can go back to the decent, funny, admirable man he was before the campaign.

Obama means that maybe candidates will decide the best strategy is to be themselves.

Obama means that appealing to the worst in us is not always the winning play.

Obama means it doesn't matter if you can trace your family tree to the Mayflower.

Obama means the one phrase that is never true in America is that could never happen.

Obama means our impatient citizens will stand in line for hours if they think it's important enough.

Obama means the rest of the world looks at us in a new way.

Obama means maybe we look at ourselves in a new way.

Obama means the rest of us have no excuses.

Obama means that our country is founded not on myths and legends, not on frilly phrases jotted down by old white men two centuries ago, but on fundamental truths that we can still make real.

Obama means that when we say all men and women are created equal, we might finally be ready to put a period at the end.

From comments at Sister Toldjah:

“Obama means that appealing to the worst in us is not always the winning play.”

Are you kidding me? Obama told the world for two years that our country is the worst country in the world. Michelle Obama is finally proud of America. Reverend Wright says, “God damn America.” What rock have you been hiding under?

So, that is what passes for Journalism in Charlotte these days?

My daughter will be ecstatic! It look exactly like the paper she wrote on a different topic for her 4th grade Open House.

for the first time in my life

"I am ashamed of America"

Buyers remorse is going to set in real quick an this will be the end of the demi,lib party

an by the way,I work for the charlotte obs,!or at least till Mcclatchy lays us off

For God's sake, it's a freaking expression. When McCain said "I never loved America until I was deprived of her", did that mean he didn't love America when he joined the Navy?

It means they each had an epiphany about what this country is all about. It doesn't mean they hated America until that moment.

Give it a rest already.

Are you sure he isn't a restaurant critic?