Long term Star-Telegram subscriber gets fed up, blogs his cancellation

My final straw with the Star-Telegram came when I got the bill for November. On the bill the carrier had highlighted via asterisks, "Remember, Star-Telegram distributors are independent contractors in business for themselves and have paid for the newspapers delivered to you." And, "If your subscription is paid, please disregard this statement. Thank you."

In addition to highlighting the 2 items I already mentioned, the carrier billed me, ahead, for December, making the total bill $35.00.

I also think the carrier may be strapped for Christmas money. Last January on the second day of the New Year, she called me, saying she was "clearing her year end books", whatever that means, and she wanted to know if I'd sent in my payment for December. Yes, I told her, it was mailed 4 days ago. I found that phone call so annoying I almost cancelled then.

On Friday I emailed Customer Service at the Star-Telegram, basically telling them the same thing I've said above and telling them I'm cancelling my subscription. I included the scanned image of the bill that was my final Star-Telegram straw. That's the bill below. I did not hear back from the Star-Telegram. This morning it was no huge surprise to find a newspaper outside my door. So, I just now called up and cancelled, again. I didn't get the satisfaction of explaining why I cancelled, because the Customer Service person didn't ask and didn't much seem to care that they'd lost a long time subscriber. 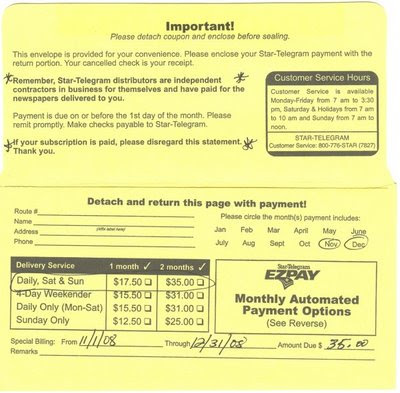 The reasons this guy cancelled his subscription at first seem trivial. But that is the way it works when a newspaper breaks faith with subscribers -- the smallest offenses can become "the final straw."
.
on Saturday, December 13, 2008

They don't care...That's the McClacthy way.
They don't care at The KC Star either. They have that slime ball Derek Donovan "The Reader's Rep." to tell you that.

I left the FWST months ago during one of the staff reductions in mid year. The newspaper was paid from my paycheck automatically, so I called to try and get it changed and pay for a year in advance. Three times I called and left messages and I still have not gotten a reply so that is that - I tried.

BTW - I'm still getting the paper - for free.

When they do catch on, I doubt I will continue. The paper is nothing but wire, which I can get for free on the Internet. And this content sharing with the DMN - no thanks. If I want the DMN, I'll buy it - I don't need them making my decisions. Sad situation - nothing but panic.

Last month I finally got a new job and can see what many others have said about life being better away from the newspaper business.